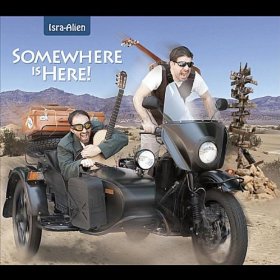 With two guitars and a second-nature connection, Isra-Alien finds the deep ties that bind rock and jazz, Israeli music and global sounds. Powered by the masterful technique and close friendship of jazz guitarist Oren Neiman and rock guitarist Gilad Ben-Zvi, the duo’s acoustic music moves effortlessly from rootsy to refined on their second album, Somewhere is Here! (release: November 2, 2012 ). They find wry, Gitano-esque twists on blazing dances (“Horah Alien”) and turn klezmer songs into sensuous feats of guitar nimbleness, inspired by everything from Astor Piazzolla to the Greek bouzouki.

Meeting on a remote base during military service and then reuniting years later in New York, Ben-Zvi and Neiman found an unexpected common ground in music that grew from the complexities of their shared heritage. By finding new sounds and settings for old forms and melodies, they hint at the diverse facets of Israeli music. 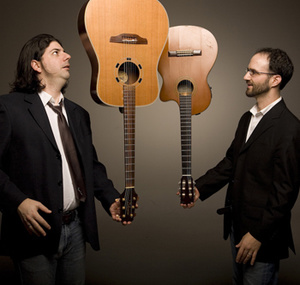 “For us, it felt like a natural synthesis,” explains Gilad. “It was in music we grew up with. It was a really organic thing.”

Humor and a penchant for improvisation and storytelling open up the duo’s instrumental pieces, engaging audiences live and echoing in the little unexpected moments—the exclamations and counts—that grace the album, giving it a light and human touch.

“Israel is a diaspora country, just like U.S. Some of the elements in the music are obvious: klezmer and Middle Eastern sounds,” Ben-Zvi adds. “But you also have the harmony of Russia, and the playing style of the Mediterranean, and the time signatures of the Balkans. It’s not just about singing in Hebrew.”