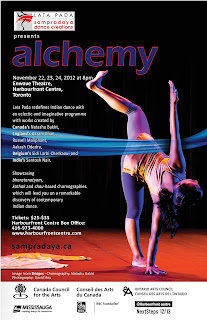 Alchemy features dance works by Canada's Natasha Bakht (with the world premiere of Bridges); the UK's Akram Khan, Russell Maliphant and Aakash Odedra; Belgium's Sidi Larbi Cherkaoui and India's Santosh Nair. Showcasing the diversity of Indian dance through groundbreaking bharatanatyam, kathak and chau-based choreographies, Alchemy is performed by Sampradaya and guest artists including Odedra and dancers from Sadhya, one of the leading contemporary dance companies of India.

Alchemy reflects a paradigm shift highlighting creative transformation and an adventurous exploration of the 'here and now' in contemporary Indian dance. In programming this eclectic evening, Pada notes, "Indian classical dance forms are often seen as fixed and archaic, discounting their ability to be fluid and modern expressions of contemporary thought and design. Indian dance, like all world traditions, constantly expresses itself in new ways. That newness is not fusion; it is a way each form speaks to its own journey of re-discovery." 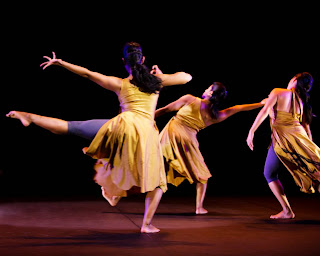 Bridges balances an underlying continuity with a vast diversity of movement, unfolding in waves of action, stillness and integration." This bharatanatyam-based piece features five female dancers.

Stealth - Toronto premiere choreographed by celebrated martial dance form artist Santosh Nair of Sadhya (India)
The stage ignites with a dynamic and provocative physicality in this new spin on Indian dance. Stillness and rapid-fire rhythms colour this kinetic work for five dancers (including Nair), charging it with oppositional energies - female and male, soft and powerful, grounded and aerial. Created in the distinctive movement vocabulary of the martial art form of mayurbhanj chau from Eastern India, this edgy contemporary work speaks of harmony and dissonance. Stealth is a remount of Sampradaya's 2010 Canada Dance Festival commission, created by Santosh Nair for two female, three male dancers.

"It's the dance equivalent of a red-carpet event to get Akram Khan, Russell Maliphant and Sidi Larbi Cherkaoui as choreographers on the same programme. And it says much for talent of the south Asian dancer Aakash Odedra that all three have created solos for his new show." - The Guardian, U.K. 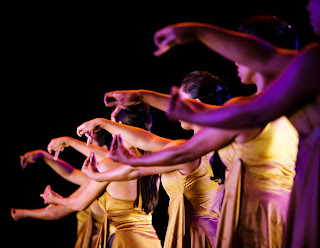