• Other dates including Montreal & New York City below

TORONTO – A musical match made in heaven, the unique talents of Italian-Canadian songstress DANIELA NARDI and Italy’s famed trumpeter FABRIZIO BOSSO will join forces for a very special performance at Toronto’s Glenn Gould Studio on Tuesday, November 27. Nardi, already established as one of Canada's most celebrated homegrown artists, sizzles on her latest project Espresso Manifesto – The Songs of Paolo Conte (Acronym/EMI Music). Bosso, one of Italy’s best-loved artists, guests on the album, which has received rave reviews and is charting on radio across North America. The Montreal Journal calls it a "true tour de force” (4.5 out of 5 stars!). As part of her North American Tour, Nardi and her stellar band – Ron Davis (piano), Kevin Barrett (guitars), Larry Crowe (drums), Mike Downes (bass), Louis Simao (accordion) and Sasha Boychuk (clarinet) – will showcase the critically acclaimed works LIVE at GLENN GOULD STUDIO @ 8 pm. Quickly becoming a “must see and experience” event, the tour will include stops in New York City, Los Angeles, Montreal, Quebec City, Ottawa, Kitchener and more!

Daniela Nardi’s latest self-produced album Espresso Manifesto – The Songs of Paolo Conte and launch of her new world music project, Espresso Manifesto, marks a musical and personal milestone for the award-winning singer-songwriter/multi-instrumentalist. Under the project title Espresso Manifesto, the Toronto-born daughter of Italian immigrants explores some adventurous and new creative territory on this album, that has required her to step out of her musical comfort zone and into the wondrous exploration of the Italian 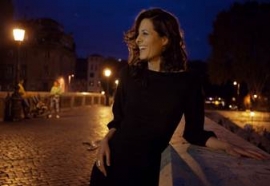 Songbook. This passionately crafted album, a tribute to the legendary Italian composer/performer Paolo Conte, is receiving rave reviews all the way from Italy for Nardi’s enchanting voice and smoldering interpretations of Conte’s works. Her expressive vocals, matched with spare, earthy, jazzy arrangements, are an evocative combination of old-world romanticism and modernist cool.

What better artist to feature in this rich Italian repertoire than hot Italian jazz trumpet-player Fabrizio Bosso? The Turin-born musician started playing at the age of five, studying under his father. The young prodigy graduated from the Giuseppe Verdi Conservatory of Turin only ten years later at fifteen. While in school he discovered jazz, playing with a big band and in small combos. Upon graduating he was awarded a scholarship to study at St. Mary's College in Maryland, USA, where he continued to pursue his new love of improvisation. Since then he has never looked back, winning countless awards and accolades along the way.

At the young age of 26, Bosso's first album as a bandleader was under the name Fabrizio Bosso Quintet for his album Fast Flight (2000) on Red Records. Impressing critics worldwide, he won the Miglior Nuovo Talento (Best New Talent) award, chosen in a survey through the Musica Jazz Magazine.

His second outing as frontman would be for the Blue Note label with You've Changed (2007), which furthered Bosso's reputation as one of the most technically impressive young jazz trumpet talents in the world.