By Michael Davies-Venn
November 15-17 2012 at the Festival of Ideas
Various locations in Edmonton, Camrose & Calgary

More than a quarter of a century ago, Russ Gershon set out to help keep alive the big-band music style that had been dying in the United States since the late 1940s. It was a period marked by big brassy sounds popularized by the likes of Benny Goodman and Duke Ellington. But Gershon also wanted something different.

He sought to organize a group of musicians who could improvise freely—something he says traditional big-band musicians were unable to do. The group he created, which he describes as “bigger than a small band and smaller than a big band,” is aptly named the Either/Orchestra.

“It’s almost like a play, an opera,” Gershon says. “One person sings their song, another sings theirs and a combination of players respond. There are different moods, because all the players bring their own mood to a song.”

Most of the “singing” in the 10-member, Massachusetts-based jazz band is done by the instruments. But when the Either/Orchestra comes to Alberta Nov. 15 to 17 for three shows in Edmonton, Camrose and Calgary, the internationally renowned Ethiopian vocalist Mahmoud Ahmed will join in on the band’s call-and-response dynamic. 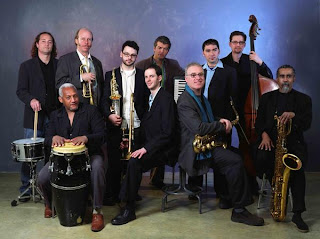 Ahmed embodies the diverse influences the Either/Orchestra will showcase during the University of Alberta’s Festival of Ideas. Unlike big bands, Gershon’s “small combo,” which gives every member a chance at soloing, culls from pop, rock and different jazz styles, such as avant garde—and adds an international flavour from the Horn of Africa.

“The Ethiopian music that I became interested in was recorded in the ‘60s, mostly in the ‘70s, and played on western instruments, the same you’d find in a jazz group,” Gershon said. “That music turned me on. I thought this is great, because I’ve been very eclectic about arranging different styles for the band. I’ve never thought that we have to only do stuff that sounds like Miles Davis from 1958.”

Today jazz is largely thought to have been created in the United States. It found its way to Ethiopia, says Gershon, mainly because that country’s emperor, Haile Selassie I, was interested in western military bands and imported western instruments and musicians to teach and lead his army band.

“Several generations of players were learning the western instruments,” he said. “After about 20 years, they started to make a fusion of Ethiopian melodies and singing with American styles. So in a sense, the Ethiopians from that point built a bridge halfway to American music because they were using some of the elements of American music as the basis of their modern music.”

Gershon says he made the other half of that connection when he took his band, which has had about 50 musicians since 1985, to Ethiopia. “It was very easy for us, as jazz musicians who are steeped in the African diaspora tradition, to meet the Ethiopians and discover what was common underneath the music from 400 years ago and even from 40 years ago.”

U of A students will benefit from those findings during a workshop in music professor Jonathan Kertzer’s West African ensemble class Nov. 16 in room 27 at the Fine Arts Building. Gershon will also speak about Ethiopian music to students in Kertzer’s African Popular Music class.

“We will play a demo concert in the workshop so students can hear the music up close, and we will talk about what we do and take some questions,” said Gershon. “It will be a semi-open rehearsal so students can see how we work on material and talk with band members who are all music teachers.”