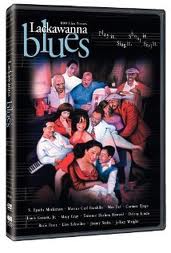 Set in Lackawanna, New York, Lackawanna Blues (2005) is based on the 2001 play by The Piano Lesson director Ruben Santiago-Hudson. Lackawanna Blues tells the story of a young boy whose life is shaped by the stories he hears and the characters he meets while growing up in a boarding house at the hub of the local African-American community.

Inspired by the true story of Ruben Santiago-Hudson’s childhood, Lackawanna Blues is driven by rhythm and blues, and tells of the changing times for African