Jazz Trombonist Samuel Blaser Quartet Returns with As the Sea

• Keep up with him on tour at this link

"I was impressed by the expression and sound of a young trombone player, Samuel Blaser. In addition to his advanced musicianship, his performance embodies profound thought. It is rare to have this kind 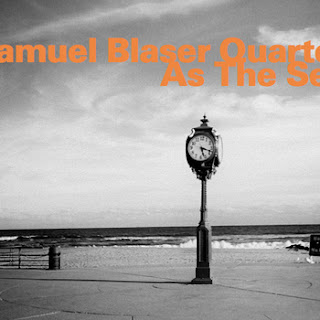 of impression Š the last similar experience was in August 1970, when I listened to Albert Mangelsdorff's concert in Japan, from a close distance." --- Masahiko Yuh, Jazz Tokyo

In the relatively short time since Blaser first emerged as a leader with 7th Heaven (Between the Lines, 2008), the trombonist has garnered significant critical praise. AllAboutJazz.com describes him as "one of the most interesting and innovative low brass players to emerge at the beginning of the 21st Century," "fearlessly modern, yet respectfully regal," and "a pioneer, already looking around the corner for the next idea." JazzTimes is similarly enthusiastic, calling Consort in Motion (Kind of Blue, 2011) an "intriguing, unconventional outing," while Audiophile Audition says Blaser's music explores "ambient/free jazz terrain that has a depth of vision and clarity revealing musical maturity beyond Blaser's nearly three decades of life."

Paris Transatlantic applauds Boundless, writing "It's not easy for a band's aesthetic to move so effortlessly between airy, textural improvisations and a tautly organized ruggedness, but that's exactly what the Samuel Blaser Quartet does in this fine hour of music." Dusted echoes a similar sentiment: "Boundless is a triumph of casting. Samuel Blaser, the Swiss-born, Berlin-based trombonist who leads this date, has surrounded himself with players who can kick his ass, and sounds better for it."

As the Sea represents the first time Blaser has maintained a consistent lineup between recordings, and it's easy to see why. Like Boundless, As the Sea consists of four lengthy pieces organized into a suite, but this time recorded at a single concert (Boundless  came from three separate performances), 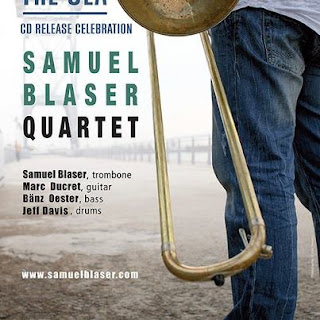 reflecting increased confidence within the group - and from Blaser, who wrote considerably more challenging charts for his band mates to navigate. "The music is quite different from the first record," says Blaser, "because things are more written. It's a little more complex rhythmically, too. But it's crazy, because I can play anything - a single note, even - and everybody will move with me. It's pretty intense."

At 56, Ducret is the quartet's oldest member, with a correspondingly large discography that includes work with saxophonist Tim Berne in Big Satan, Science Friction and Caos Totale. As far back as his own outstanding Qui Parle? (Sketch, 2003), the guitarist defined his interest as "all the sounds: the beautiful ones, the unpleasant ones, the very strong ones, the very soft ones, the very calm ones."

Nearly a decade later, Ducret's performance on As the Sea is the inevitable consequence of approaching Blaser's music with a distinctive and unfettered combination of harmonic sophistication, ever-open ears, and textures that range from tart and clean to gritty and viscerally overdriven.  Of his work on Boundless, AllAboutJazz.com writes, "Ducret's malleable, shape-shifting sound and phrasing permutes as the music moves from the knotty, complex opening theme through the dark, stormy balladry of its closing minutes."

AllAboutJazz.com also has plenty to say about Cleaver's prior work with Blaser, writing "There are some amazing drummers with incredible chops out there, but Cleaver is one of a distressingly small number who can actually tell a story with his instrument." Similarly enthusiastic in its admiration for his work with Uncle June, Farmers by Nature and bassist Formanek, JazzTimes describes Cleaver as a "ubiquitous looming background presence who operates effectively within the most fluid conceptions of time," while Dusted lauds him for his "tight work with brushes [that] continually cajoles" and his "polyrhythmic sizzle," making particularly note of how the drummer exudes "organic flow and effervescent energy without indulging in excess." In a 2011 Ejazznews interview, Cleaver describes himself as making "a living playing 'WTF?!?' music," and it's as good a way as any to describe his relentlessly unpredictable approach - first on Boundless, and now with As the Sea.

Oester has also garnered his share of significant attention, with AllAboutJazz.com lauding his "organic sound and limber parts [which] offer a rugged underpinning."  Squidsear hails the bassist's contributions to Boundless as "bubbling bass lines [which] move effortlessly from melodic counterpoint to tumbling, propulsive anchor playing off Cleaver's drums." With a curriculum vitae that includes work with Swiss percussionist Pierre Favre, American drummer Gerry Hemmingway and singer Elina Duni, Südkurier expresses similar admiration for Oester's "exuberant creativity and love for his instrument," and for his "great conceptual intelligence." 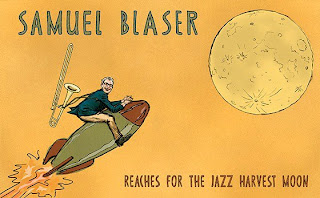 Already broad-scoped, Blaser's writing has become even more expansive for As the Sea. The complex rhythmic concept of the Indian Tihi is but one reference point for "As the Sea, Part IV," while "Part I" is based on a tuba obbligato first heard in a performance of Richard Wagner's famous 1876 opera, Siegfried. "It is a little bit more difficult to include improvisation in this material, because the writing is more specific," says Blaser, "whereas Boundless was more about very open lines."

Blaser combines knotty compositional form with incendiary improvisational prowess on "As the Sea, Part II," where an exhilarating, extended mid-piece duet with Cleaver - alluding, in spirit, to saxophone giant John Coltrane's legendary duos with drummer Elvin Jones - sets a high bar for the entire set, with the trombonist's rich, pure tone and effortless multiphonic mastery matched by the drummer's thundering, connected-at-the-hip potency. Ducret's career has honed an intrepid and unfettered instinct for what is right for the moment, here comfortably traveling from clean-toned idiosyncrasies to brief rock 'n' roll moments during his breathtaking solo on "Part II," while kicking in some overdrive for an even rawer turn on "Part IV."  And the subtle swing behind the guitarist on "Part I," as well as a strummed, plucked and muted feature at the start of "Part III," makes Oester an absolutely essential partner and cornerstone of the quartet.

Blaser's music may be more challenging this time around, but with additional touring under its belt since the release of Boundless, the trombonist's quartet has reached that point to which many aspire but precious few achieve, where its internal language and shared understanding has become so deep, so profound, that anything can - and, invariably, does - happen.  Another significant signpost along a still-nascent path, one predicated on the musical and personal relationships forged by the 31 year-old Blaser in just a few short years, As the Sea represents both a powerful and profound statement of the here and now, and a firm predictor of even better things yet to come.