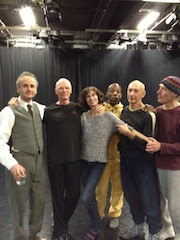 Nashman, Tom Brouillette and BaKari I. Lindsay take the stage from November 30 to December 2 in Edition #27 of Older and Reckless.

Older & Reckless, an informal performance series, features work from OLDER artists who continue to grow more RECKLESS as time goes by. Older & Reckless provides an opportunity for seasoned dance artists to perform short works and a chance for the audience to see some of Canada's most celebrated senior choreographers.

Conceived by Claudia Moore, artistic director of MOonhORsE Dance Theatre, Older & Reckless is "an intimate exchange for both the performer and the observer; exciting, terrifying, and lots of fun. The performances are followed by a party with music, refreshments, and a chance to talk with the artists about work, process, and whatever else comes up!"

Governor General Award winner Paul-André Fortier brings Box, L'homme au carton. The origin of this new work, premiered in 2011, was solo 1x60 - a garden of objects, created in Japan in 2006. In the work, a man is dancing with a box. In the hands of this remarkable dancer, the box is transformed into a poetic object and opens a breach into the imagination of the ones witnessing the dance: the solo becomes a duet.

Fortier, one of Canada's foremost dance creators, was recently named as a laureate of the Governor General's Performing Arts Awards for Lifetime Artistic Achievement. The awards, created in 1992, are presented annually to "Canadians whose accomplishments have inspired and enriched the cultural life of our country. The Awards are regarded as the ultimate recognition in Canada's performing arts." In 2010, he was appointed the Chevalier dans l'ordre des Arts et des Lettres by France. 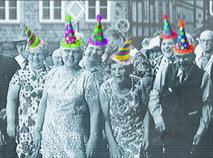 Additionally, at 3pm on Saturday December 1, Fortier will present a free screening of his documentary 30x30, Diary of a Nomadic Dancer. Directed by Yannik B. Gelinas with a score by Martin M. Tétreault, the film follows the adventures of Fortier as he presents his 30x30 solo in five cities on three continents.

Performer Alon Nashman, who recently received rave reviews for his one-man show Hirsch at the 2012 Stratford Festival, will bring an excerpt of another one-man show, Kafka and Son. Described as a blistering, often hilarious, dissection of domestic authority, and a revelatory visit with one of the architects of the modern psyche, Kafka and Son is a monologue, but one conveyed with a rich physical expression - and truly belongs in a series devoted to how physical expression can take the audience to realms beyond what can be achieved with just words. "Nashman's fully committed, physical performance traces its emotional path from caged frustration to the desperate final flight towards arts timeless promise of freedom." (Matt Radz, Montreal Gazette, June 11, 2007).

Rounding out the program is Tom Brouillette in a Danny Grossman classic, Transcendence, with music by the late Ann Southam; and BaKari I. Lindsay, co-founder of COBA (Collective Of Black Artists), in his solo work Ancestral Calling.

And the public doesn't need to just stand on the sidelines - they can sign up for a Nia workshop with Martha Randall, 5:30pm on Saturday, December 1 ($10). And they are invited to join in a gentle and rejuvenating audience warm-up prior to each performance; and to stay for an after-party and a chance to talk one-on-one with the artists.

Tom Brouillette started dancing at the age of thirty in intensive training with Mary Wigman disciple Til Thiele. He was a lead dancer with both Desrosiers Dance Theatre and the Randy Glynn Dance Theatre, and has performed regularly with independent choreographers such as Peter Chin, Marie-Josée Chartier and Holly Small.

Paul-André Fortier entered the world of dance in the 1970s via one of Quebec and Canada's most innovative choreographic companies, Le Groupe Nouvelle Aire. Even before Fortier became known for his choreography, he had already earned a reputation as a dancer for his elegant, refined and commanding stage presence. In 1979 he created his own company, which later became Fortier Danse-Création.

Alon Nashman is an award-winning actor, director and producer who was named Number One Theatre Artist in 2008 by Toronto's NOW Magazine. With the creation of THEATURTLE ten years ago, Nashman initiated new work such as The Song at Theatre Passe Muraille and Kafka and Son for the Ashkenaz Festival, World Stage Festival and Al Green Theatre.

BaKari I. Lindsay was born on the sunny isle of Trinidad, West Indies. Perfecting his craft for the past 25 years, BaKari is a dancer, choreographer, researcher, singer, musician, costume designer/maker and father. He studied at the Alvin Ailey American Dance Theater, The School of Toronto Dance Theatre on scholarship and with various teachers from the Caribbean and the African Continent, and holds a Masters Degree in Dance Ethnology, and Bachelors of Education degree from York University.