Electric Cowbell Records is announcing the debut album from Karthala 72, featuring the sound of

1970's psychedelic freakout only heavier than you ever heard it before.

The sound of a 1970′s psychedelic freakout only heavier than you ever heard it before! The new Karthala 72 full-length album (Diable du Feu!) brings some seriously dark, driving funk meets Afrobeat. There isn’t much on the group out there on the internet. We can’t even figure out exactly where they are from but tribal rhythms and hypnotic guitar echo to a time when the raw sound was king. 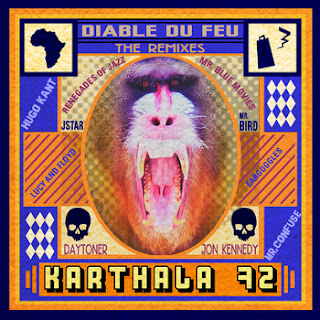 Being fans of the ‘groove’ we, like nearly every other DJ, producer and collector out there are constantly on the lookout for that holy grail - the undiscovered break. But even better for us - a whole record that just makes you go crazy! So, here we present Karthala 72... dug out of a dusty crate in a forgotten record store in a small town. Karthala 72 crafted a series of recordings that have an honest, hard edge engineering approach. Using a minimal amount of recording equipment in a makeshift studio (the most likely scenario?) they created a super tough groove and a sonic musical feel that is straight up 1970’s psychadelic Africa. Little is known about the band - when and where founding members Vincent Tendaji, James Mtondoo & Colin Moyo-shan layed the tracks down for instance - and people who might know more about them seem unwilling to divulge. What we do know is that Karthala 72 are unapologetically rough and ready - The afro sound unlike anything you've ever heard, but just the way we all wanted to hear it but were never quite able to find...until now. - JetTricks

Sounds like-or may remind you of-some psychedelic moments with Wayne Shorter, Can, Miles Davis stirring his Bitches Brew, Sonny Sharrock, Zambian-psych, Witch and some Now-Again excursions, soundtracks to shamanic sessions, Iboga-house, and much much more!