'Botswana Meets Six Nations' was the tagline for this concert and a very literal description of what went down last night at the Art Gallery of Hamilton. Canada is a place of many nationalities it's true but when it comes to the expression of culture, we tend to stay in our separate solitudes. We can co-exist peaceably but we don't really mix too often when it comes right down to it.

Matapa Music & Arts wants to change all that, beginning with this series of concerts that ingeniously pairs two contemporary artists of musical traditions that are separated by geography and ethnicity and all that implies. Those separations melted away by the time the show reached its third act; but first both bands performed a set.

Cheri Maracle began with only the accompaniment of Jani Lauzon and a hand drum to punctuate their sweetly hypnotic vocals. With each song the band grew to include an impressive line up of Walter Maclean on drums and Marc Nadjiwan on guitar along with piano and bass.

Cheri's music is rhythmic contemporary rock with the harmonic and stylistic flavour of her Mohawk heritage. Her voice is compelling and goes from sugar sweet to a bluesy growl. She sings about a range of subject matter including social commentary like 500 Missing Women, about the growing number of Aboriginal women who go missing or are murdered. When did we become the hunted? she sings. Other songs touch on the personal or childhood memories.

Trinity Mpho arrived in Canada a mere two months ago after a successful career in his home of Botswana and the Matapa concert was his first show on Canadian soil. His background includes gospel and jazz and both those musical influences come out in a powerful vocal style and his upbeat take on Southern African music. 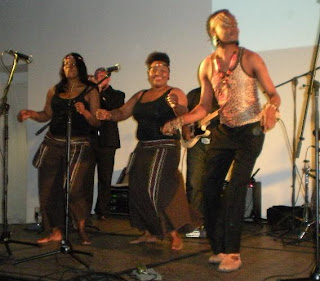 His songs involve layers of driving polyrhythms underneath strong vocals and rhythm guitar, with keyboards and horn to add to the melodic mix. While Trinity and his two back-up singers/dancers come directly from Botswana, the remainder of his band consists of Hamiltonian musicians - another Mapata initiative. He had the audience obediently to its feet and dancing on the second song.

After the two sets, the musicians joined forces for a couple of jams. Each band took the stage in turn with the singers from the other joining in - not that it was that cut and dried. The results, a jazzy and then a bluesier jam each, prove that music really is a universal language and the evening far from an interesting experiment.

Matapa Music & Arts Organization is an incorporated Canadian non-profit organization located in Hamilton, Ontario, Canada. MATAPA aims to celebrate cultural diversity through the presentations of world music and arts, festivals and education. Keep an eye out for their upcoming concerts: