TARRAGON THEATRE PRESENTS THE SMASH HIT
A Brimful of Asha
November 25 to December 16, 2012

A WHY NOT THEATRE PRODUCTION
WRITTEN BY AND STARRING MOTHER AND SON, ASHA & RAVI JAIN

"Why do you need to choose your wife?"

TORONTO - After a sold out run in January, Tarragon Theatre proudly presents a return engagement of the smash hit A Brimful of Asha. A Why Not Theatre production, written and performed by real-life mother and son Asha and Ravi Jain and directed by Ravi Jain, A Brimful of Asha runs November 25 to 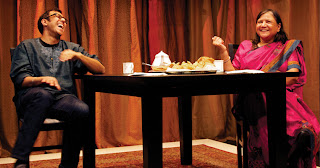 December 16 in Tarragon Theatre's Extra Space (with media night November 27).  Tickets range from $21-$53 (inclusive of HST) and are available by calling the box office at 416.531.1827 or by visiting www.tarragontheatre.com.

Asha and Ravi Jain share the stage and tell the tale of how Ravi's parents planned a surprise trip to India to intercept him on his vacation and arrange his marriage. Ravi resents the intrusion but, as far as his parents are concerned, it's time for him to get a wife!

Ravi knows what he's up against: a whole way of life cherished by his mother's generation and those before her. Can he remain true to himself and bring Asha some peace?

Nightly sold out shows and critical accolades greeted this laugh-out-loud (and very Canadian) true story. A Brimful of Asha has just been published by Playwrights Canada Press and is available for sale in the Tarragon Theatre lobby.

Ravi Jain is a multi-award-winning actor, director, producer, educator, arts-activist and Artistic Director of Why Not Theatre. Along with his extensive acting and directing credits, Ravi is engaged in many different arts organizations and creations across the city and the globe, including the programming committee for the Daniels Spectrum as well as the Artist Advisory Committee for ArtReach Toronto. He was recently awarded the 2012 Pauline McGibbon Award and is the Artistic Director-in-Residence at the Theatre Centre for 2013.

Asha Jain grew up in New Delhi, India. Upon completion of her Master's Degree, she married in 1974, which led to her immigration to Canada. While supporting her husband Ramesh in the founding of his own business, she raised two boys, Anurag and Ravi. She is a wonderful mother, wife and now a very funny actor. She is excited to be sharing this story with the world, in order to finally prove her son wrong.