This exhibition is carried out in remembrance of the late Spanish Ambassador to Harare (Zimbabwe), H.E. Pilar Fuertes Ferragut, who decisively supported the arts of Zimbabwe. This exhibition was organized by The Gabarron Foundation in collaboration with the Spanish Embassy in Harare and the National Gallery of Zimbabwe. 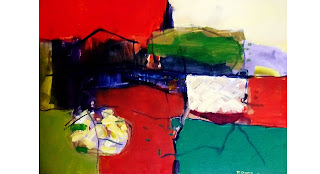 NEW YORK CITY - “The Spirit of Friendship” group exhibition consists of 11 contemporary African artists curated by Cliford Zulu, Curator of the National Gallery of Zimbabwe. The exhibition will open on December 6th in New York City and it will remain open at The Gabarron Foundation until February 22, 2013. The “Spirit of Friendship”has already traveled thru several venues, starting last summer in Harare, capital of Zimbabwe, followed by the National Gallery of Bulawayo, and recently came from the Museum of the Gabarron Foundation in Valladolid, Spain.

The Cristóbal Gabarrón Foundation is once again approaching young emerging artists by way of a new and ambitious project entitled “Entre dos aguas”, a tribute paid to Ms. Pilar Fuertes, an approach to
Zimbabwean art that shows the strong attachment of The Gabarron Foundation in favor of the artistic and multicultural meeting point of regions and countries of many different parts of the world.

The Gabarron Foundation  Museum has promoted in the last number of years, and among its scheduling of permanent exhibitions, a strong line of approach, interaction, and appreciation of artistic expression that are far from our more traditional paradigms, constituting an essential part of art history of all time. An example that would be worth mentioning of the exhibition “Gods and Rituals” has been shown in the Valladolid location of The Gabarron Foundation, artworks belonging, among others, to the classical, Pre-Columbian, Asian, and African cultures. Precisely within these, the works belonging to the cultures of our neighboring continent occupy a prominent place. Their diverseness, variety, and originality always represent a benchmark among the museum’s visitors. 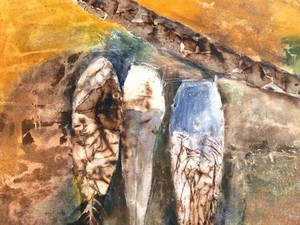 We all know the close bond that united the avant-garde at the beginning of the twentieth century with the artistic and cultural realizations of the African peoples, entitled “primitivism” enclosed within itself the most precise synthesis of the minimalist aesthetic, abstract or organic, that would dominate a great part of the first half of the western twentieth century. Names such as Picasso, Vlamick, Matisse, or Derain cannot be understood without evoking their studies of masks, sculptures, or fetishes coming from the African colonies, that began to inundate at that time the Museums of European Ethnology and to equally constitute a sought after collector’s item, especially among the artists previously mentioned. In the words of Professor Ocampo: “The primitive era, clearly, a contradictory pole, sometimes antagonistic, of the artistic tradition that the avant-garde artists had inherited and had shaped”.

This new and promising project with the collaboration between the Cristóbal Gabarrón Foundation, the Spanish Ambassador in Zimbabwe, and the National Gallery of Zimbabwe, come together to produce from la FCG, enhancing and combining the former career in favor of the approach of traditional art 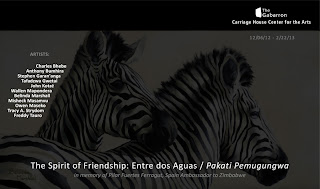 and the international tendencies of contemporary art, not only by way of the greatest art - historical figures, but also of emerging art, to which the Cristóbal Gabarrón Foundation has provided and continues to provide an outstanding support. At precisely the moment when that incentive is much more necessary for the dissemination and knowledge of the works of these young artists who are exhibiting some of them, for the first time, in Europe.

The freshness of styles, techniques, and themes that reflect the Zimbabwe artists, is a renewed air for the visitors to MFCG, that will have an occasion to approach the subtle painting of John Kotze, to the capricious forms of Wallen Mapondera (second image above), to the visual force of Mishekc Masamvu, to the animal realism of Belinda Marshall, to the visual compositions of Tracy Ann Strydom, the fluctuating silhouettes of Owen Maseko, to the evocative masks of Tafadzwa Gwetai, to the striking landscape of Freddy Tauro (image above), to the collective humanism of Charles Bhebe, to the 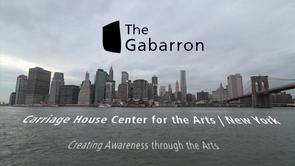 fluctuating silhouettes of Anthony Bumhir, and to the dreamy forms of Stephen Garananga. Each and every one of the twenty-one works is the reflection of an aspect of intimate relation with the culture and personal experiences of each of these artists.

The strong personality of each of them, under the premise of a global world where the relations and the knowledge have opted to multiply to the speed of light along the highways of new technologies, have resulted in the magnificent and varied show that we have the pleasure to present in the centers and museums that The Gabarron Foundation maintains in Europe and the United States.
african art contemporary southern african art gabarron foundation new york art gallery opening zimbabwean artist