NEW YORK CITY - For his remarkable debut album, "Breaking the Ice," Eric DiVito draws on his command of both jazz and classical guitar styles, as well as on his interests in jazz and pop composition, to 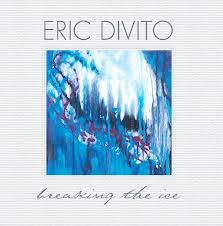 In the midst of a busy career as working musician and educator, New York guitarist/composer Eric DiVito has finally carved out the time to make his recording debut as a leader. "Breaking the Ice," a quartet date co-produced by DiVito with Portland pianist/arranger Ezra Weiss and veteran jazz producer/promoter Todd Barkan, was recently released on the Canadian Pioneer Jazz Collective (PJC) label on October 2.

“One of the most totally unexpected and pleasant surprises of my last 30 years of jazz production has been the constant smile to be regularly experienced in Eric’s consistently uplifting compositions, arranging, and guitar playing,” says Barkan.

Snir-Zelniker. DiVito’s solo performance of “Time Remembered,” the Bill Evans classic and the album’s only nonoriginal, is played classical-style on a nylon-string guitar.

Throughout, DiVito draws on his command of both jazz and classical guitar styles, as well as on his interests in jazz and pop composition, to create a wonderfully varied program—from the “dizzy, hectic feel” of the opener “Like Minded,” to the ballads “For Maria” (written for his wife of five years) and “Her and Hymn” (partially inspired by Joni Mitchell), to the gently swinging “Pass’ Time” (for Joe Pass, one of his heroes) and high-energy “Shoot the Messenger” (for Art Blakey).

The mysterious “Tango” is a quartet number, with Saslow on tenor. “Being a classical guitarist,”DiVito says, “there’s a lot of tangos and Latin music in my repertoire. I thought it would be a nice contrast to some of the more straight-ahead or pop kinda tunes.”

Growing up in Northport, NY, Eric DiVito played percussion instruments in his elementary school orchestra and concert band and “learned to read music first as a percussionist,” he recalls. He took up guitar in middle school. Although he had an early interest in Jimi Hendrix and Guns N’ Roses, jazz guitarists were his primary inspiration, particularly Jim Hall, Pat Metheny, and Joe Pass. He also cites Jack Wilkins and Paul Bollenback, both of whom he studied with, as later influences, and he counts Julian Bream among his classical guitar favorites.

“I gravitated towards jazz on the guitar because it allowed for what I felt was more creativity and improvisation,” DiVito says.

Joni Mitchell, Wayne Shorter, and Maria Schneider stand out among his favorite composers. “They take you on a journey,” he explains. “Those composers in particular almost transcend genres. That’s a quality I like to strive for in my compositions.”

The guitarist began playing professionally while still in high school at restaurants, bars, weddings, and other private affairs, sometimes solo, other times in combos with classmate Jake Saslow. DiVito still does solo jazz and classical gigs, often mixing the works of J.S. Bach and other Baroque composers, Spanish and Brazilian guitar music, jazz, and “stuff in between.” 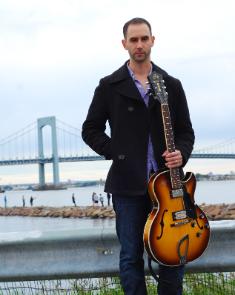 DiVito majored in classical guitar and music education and minored in jazz at the Crane School of Music in Potsdam, NY, from which he received a B.M. in guitar performance and music education. At the Aaron Copland School of Music at Queens College, where he earned an M.A. in jazz performance, his instructors included Bollenback, saxophonist Antonio Hart, and trumpeter Michael Philip Mossman.

The guitarist has been living in Queens since completing his education there. For the past six years, he’s been the music teacher at Castle Middle School on the Lower East Side of Manhattan, where he created a curriculum that includes general music, music appreciation, theory, band, concert band, chamber ensemble, and guitar. And, when he has the time, he teaches guitar privately in the evenings and on weekends. Besides solo guitar engagements, he has performed with his own combos at such leading New York jazz establishments as the Iridium, Smalls, Miles’ Café, the Garage, Puppet’s Jazz Bar, and Tutuma Social Club. And every month or so, he leads a Red Hot Chili Peppers tribute band called PepperSpray.

“It’s a balancing act,” DiVito says of his career. “Sometimes things get too busy, and I don’t gig as much as I want to or I can’t have as many private students as I want. I’m always trying to juggle.”

With "Breaking the Ice," Eric DiVito is finally breaking out beyond the New York City club circuit and stepping onto the world stage. “I’ve been blessed since moving to New York City to be able to regularly work with some of the greatest musicians,” says DiVito. “It is their talent and skill that help push me forward both creatively and technically and that make me want to be a better musician. It is both humbling and extremely rewarding.”