Toronto, ON… Nightwood Theatre will revive its 2012 smash hit production of The Penelopiad by Margaret Atwood. The play, directed by Kelly Thornton, will open January 10 and run until February 10, 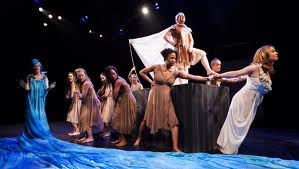 2013 at Buddies in Bad Times Theatre.

The Penelopiad is Atwood’s uncompromising response to Homer’s The Odyssey following Penelope (Megan Follows) through the 20-year absence of her husband Odysseus who is fighting in the Trojan War. Left to raise an unruly son, fend off hundreds of opportunistic suitors and maintain composure amidst scandalous rumours, Penelope enlists her maids in a ruse to protect her good name. But when Odysseus returns and massacres the suitors and brutally hangs the 12 maids, all eyes look to Penelope in her culpability. “Now that I’m dead I know everything” are the first lines uttered as she returns from the underworld, Hades, to set the record straight. But in Atwood’s clever hands, Penelope is haunted by the twelve handmaidens who’ve fallen victim in her deceptive ploy. Laced with wit and wisdom, Nightwood’s production of Atwood’s The Penelopiad is pure theatre: a bold theatrical spectacle, matching gorgeous design, stage invention, potent storytelling, song, dance and powerful performances.

• Nightwood’s 2012 production played to sold out houses and garnered critical acclaim
• 2012 Dora Award winner for Outstanding Performance in an Ensemble
• Toronto Theatre Critics’ Award for Best Supporting Actress in a Play, Kelli Fox in The Penelopiad