Off Broadway: The Wonderful Wizard of Song Previews Dec 13 2012

THE WONDERFUL WIZARD OF SONG:
THE MUSIC OF HAROLD ARLEN
BEGINS PERFORMANCES AT ST. LUKE’S THEATRE
DECEMBER 13, 2012 AND OPENS JANUARY 10, 2013 at 8 PM 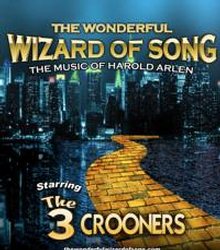 The Wonderful Wizard of Song moves from The Cotton Club, thru Harold Arlen’s Hollywood Years to Broadway, sharing inside stories of how some of the world’s most beloved songs were created as well as sharing rare behind the scenes footage from The Wizard of Oz taken by Harold Arlen himself.  Featuring The Three Crooners, George Bugatti, Marcus Goldhaber and Joe Shepherd, with Antoinette Henry, the Arlen revue makes its New York debut after a national tour to 18 cities and a month-long run at the Debbie Reynolds Theatre in Las Vegas.

Produced by Yellow Brick Productions in association with Shea Arender,  Steven Colucci and Jerry Rosenberg, THE WONDERFUL WIZARD OF SONG has direction & musical staging by Broadway veteran Gene Castle.  The original concept is by Nigel Wright, Sam Arlen and George Bugatti with special thanks to Harold Arlen’s son Sam Arlen for all archival and historical content. 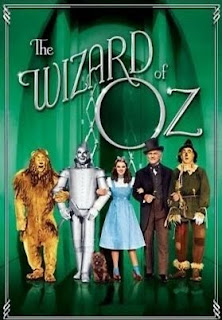 The Three Crooners are headed by creator George Bugatti who is an American singer, pianist and songwriter with three CD's in wide release.  His latest CD, “A Night for Romance”, was produced by Nigel Wright (Executive Music Producer of American Idol and Warner Bros’ Phantom of the Opera) and is distributed by Universal/Verese Sarabande.

Marcus Goldhaber has appeared in NYC at Birdland, The Kitano, The Metropolitan Room, Iridium, The Laurie Beechman, The Cutting Room, The Makor/Steinhardt Center, The Carnegie Club and The Lenox Lounge as well as in Boston, Chicago, Baton Rouge and New Orleans. His theatrical credits include: THE PAJAMA GAME, KISS ME KATE, SINGING IN THE RAIN, MY WAY (Sinatra tribute) and I LEFT MY HEART (Tony Bennett tribute).

Joe Shepherd is from College Station, TX and has his BFA in Dance from Sam Houston State University. He has danced professionally in Houston, Texas with modern companies Hope Stone and NobleMotion.

Born in 1905, HAROLD ARLEN began playing with local bands, movie houses, vaudeville troupes and cabaret as a teenager in his home town of Buffalo, NY. His early collaboration with Ted Koehler, beginning in 1930, lead to writing such hits as “Between the Devil and the Deep blue Sea” and “I’ve 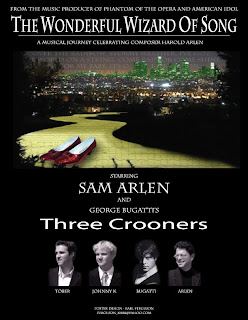 Got the world on A String” for the famed Cotton Club In 1939 he won the Oscar for Best Original Song for “Over The Rainbow” from THE WIZARD OF OZ and earned 8 more Academy Award nominations including “The Man That Got Away” from “A Star is Born”. Arlen was enshrined in the Songwriters Hall of Fame in 1971 and passed away in 1986 at age 81.