“Nothing is funnier than unhappiness"  ~Samuel Beckett.

TORONTO - One of the greatest things about The Pub is that the best of them are filled with characters, and great stories come to life in them as naturally as a smooth ale slides down the throat. Written and performed by Teige Reid, IN VINO VERITAS is a satirical exploration of the cruel, 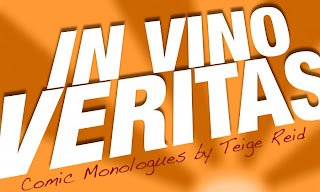 poignant, and hilarious twists of fate that haunt the denizens of a small pub in Toronto. IN VINO VERITAS creates a delightfully comic and touching picture of the damage life can inflict upon any of us – at any time. Hosted in the intimate settings of the Wellesley Fox & Fiddle once each month beginning Friday October 19, IN VINO VERITAS is a unique theatrical experience you will not want to miss.  Tickets are $20 each at the door, and seating is limited.

Born in Dublin, Ireland, Teige Reid has imported to Canada a love of story-telling and a wonderfully twisted comic sensibility. A prolific writer, and award winning actor, Teige is a skilled satirist with a strong comedic voice, who never fails to captivate, surprise, and most of all, entertain: “A master of dramatic comedy, Reid can age himself at will, and his writing which is sometimes hilarious and sometimes frightening is always original and so varied that it is sure to provide something for everyone.” (The Winnipeg Free Press).

Guest artists supporting the show include musician Julian Sark, and comedian Darryl Purvis. Julian Sark has been a member of Flickershow (Drawing A Blank) for the past decade, was a finalist in the 2011 Great American Song-writing Contest, and is currently is currently recording his next solo album,

titled Pedestrians Obey Your Signals. Darryl Purvis is one of the first-rate joke writers on the Canadian comedy scene. Darryl has performed at festivals and clubs across North America, made numerous national television and radio appearances including his own Comedy Now! episode on CTV/The Comedy Network, and the Halifax Comedy Festival on CBC-TV.

Pubcrawl Theatre: The Pub is where you find the music you like, the people you like, and most importantly, the beer you like. As an immigrant to Canada, The Pub allowed Teige Reid to remain connected to a distinct cultural experience that sits at the very heart of what it means to be Irish … allowing him to feel, however briefly, the atmosphere of home. Where better to experience an evening of performance and story-telling, than in a place where the very air rings with the living echoes of so many stories? And so, Pubcrawl Theatre was born: to produce shows specifically designed to be performed in a pub environment.

Teige Reid would love to tell you a story … or two … so come on in, pull up a chair, order a plate of your favourite pub grub, a pint or two of your favourite beer, and let’s have some fun. IN VINO VERITAS. Sláinte!

Tickets: All tickets are $20 at the door, or in advance via teige@pubcrawltheatre.com. Seating is limited!
irish storytelling monologue show one man show pubcrawl theatre storytelling theatre toronto theatre scene