NEW YORK CITY - The 1913 premiere of Nijinsky’s The Rite of Spring caused legendary scandal and has since been regarded as a milestone in dance history. French dancer / choreographer David

Wampach draws inspiration from filmmaker Jean Rouch and photographer Trude Fleischmann, as he radically re-imagines Nijinsky’s group choreography into a duet. Wampach’s pioneering SACRE is equally as earthy, wild, and dissonant as the original.

In 2002, David Wampach started his company: the Association Achles, where he revealed himself as one of the most trailblazing young choreographer of France. His solo circon c is (2004) won the first prize at the Biennale des jeunes créateurs d’Europe et de Méditerranée. High-profile performances such as BASCULE (2005), QUATORZE (2007), AUTO (2008) and BATTEMENT (2009) ensued (note that Wampach always capitalizes his titles). The choreographer is now also making waves internationally. He was laureate of the famous Villa Kujoyama programme in Kyoto and, unique for a non-commercial dance, his SACRE piece is sponsored by cosmetics giant Hermès. 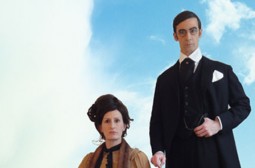 Raw minimalism and abstract eroticism characterize Wampach’s work, as does a form of skillful emotional extremism. He admires conceptual makers, but finds it equally important to engage in dialogue with the canonical tradition and pop culture. A different work he made is CASSETTE (2011), based on the legendary masterpiece Nutcracker, using ballroom dance.

Curiosity for other art disciplines is a recurrent theme in Wampach’s artistic development. He collaborated with novelists and filmmakers. At the moment, the choreographer is working on his first film RITE, an echo of SACRE.