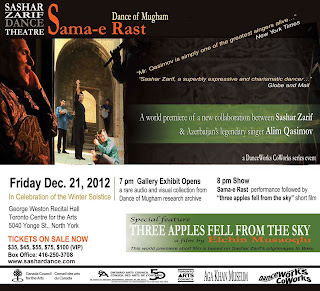 Sashar Zarif, accompanied by the legendary Azerbaijani Mugham master singer Alim Qasimov and his Ensemble, this thrilling DanceWorks CoWorks Series event is presented Friday, December 21 at the Toronto Centre for the Arts' George Weston Recital Hall in celebration of the Winter Solstice.

Sama-e Rast is the first of a planned trilogy to introduce the art of Mugham - connected to the Sufi and Shamanic cultures of Azerbaijan, Iran and Central Asia - to Canadian audiences through Sashar Zarif Dance Theatre's Dance of Mugham Series. These are the same cultures that have been introduced to the west through the poetry and philosophy of people like Rumi and Omar Khayyam.

Sama-e Rast represents a mystical journey of man's spiritual ascent through mind and love to self-discovery, in an innovative reconstruction of a dance form based on poetry, spirituality, calligraphy and the music of Mugham. Centuries ago, Mugham was a devotional integrated practice that brought all of these elements together to explore psychological moods on the path to self-discovery..However, over the years, the connection between the poetry and music disappeared and the dance element deteriorated such that only traces of it exist today. Sama-e Rast is the culmination of an extraordinary eight-year collaboration between Zarif and Qasimov - last seen in Toronto with Yo Yo Ma in 2010 and with the Kronos Quartet at Luminato in 2011 - to reintegrate dance back into the art form, and 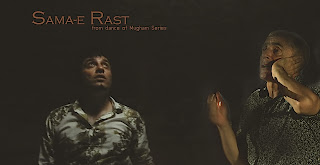 Sashar Zarif is a multi-disciplinary artist and educator whose acclaimed artistic practice examines multiculturalism through dance and whose merging of creative and cultural perspectives in over 28 countries, across 4 continents, has earned him global notoriety. His artistry is steeped in the traditional, ritualistic and contemporary dance and music of Western and Central Asia, specializing in Sufi and Shamanic dance rituals. He seeks to break down barriers through greater cross-cultural understanding. On faculty at York University, he has toured across the Americas, Europe, North Africa, Central and Western Asia and the Middle East. The recipient of numerous prestigious awards for his work and collaborations with artists, universities and arts institutions across many continents, Zarif's recent awards include a Chalmers Fellowship, New Pioneers Award and the Queen Elizabeth II Diamond Jubilee Medal. The Globe and Mail calls him "superbly expressive and charismatic."

Alim Qasimov is the world's leading exponent of the sophisticated Azerbaijani art form of Mugham. Qasimov has been hailed for his dexterity, unashamedly emotional delivery and a vocal improvisation that represents a move away from the traditional style of Mugham. The recipient of the international IMC/UNESCO Music Prize in 1999, one of the highest international accolades for music, his numerous ongoing collaborations with Yo Yo Ma and the Kronos Quartet are among his many experiments with Mugham. The New York Times says, "Alim Qasimov is simply one of the greatest singers alive, with a searing spontaneity that conjures passion and devotion, contemplation and incantation."

Award-winning Azerbaijan filmmaker Elchin Musaoglu, one of the foremost film directors in Asia, premieres his short documentary Three Apples Fell from the Sky at the end of the show. Based on Sashar Zarif's pilgrimages to Baku since 2004, the film tracks Zarif's search for the Dance of Mugham as well as for his own self-discovery..

A unique audio and visual exhibition of Sashar Zarif's eleven years of research in Western and Central Asia for the Dance of Mugham partners the show and is open for viewing from 7pm on in the Gallery.

7pm: Gallery Exhibit of audio and visual material from the Dance of Mugham research archive opens for viewing
8pm: Sama-e Rast performance begins,
followed by the premiere of the short documentary Three Apples Fell from the Sky