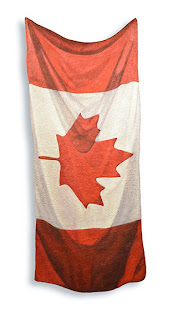 The title, JACK PINE, derived from the infamous Tom Thomson painting, is a national personification of how we view ourselves. Rather than just our landscape this work provides a different interpretation of Canada by presenting the viewer with images and cultural objects that have preconceived personal meaning. The work is  underscored with a deep sense of social and historical commentary, with a light touch of iconoclastic humour thrown into the mix.

Jeff's Toronto exhibition this past summer resulted in Molloys work being added to some major Canadian collections alongside prominent artists David Milne, Lawren Harris, A.Y. Jackson, Alex Coville, Christopher and Mary Pratt to name a few. “ I was amazed by the art collections owned by some of my Toronto patrons.” comments Molloy “ The Labatts bought six pieces, two major pieces were shipped to their villa in Tuscany and the rest hang in the famly cottage in the Muskokas.

“Jeff Molloy's work has been capturing the spirit of Canada long before the rest of the world caught on during the Olympics. He is one of this country's leading editorial artists. Jeff Molloy is one of the most original artists at work in Canada today”. - Shelagh Rogers, CBC Radio One

The Adventures of JACK PINE  Dec, 6th -- Dec 19th   at the Winchester Gallery, 2260 Oak Bay Ave.
Read more about show and see some of the work here
Read about the crazy road trip this past summer from Gabriola Island to Toronto here
Watch for an article on Jeff in Boulevard's December issue and here his interview with Sheryl MacKay on CBC's North by Northwest in early December
contemporary visual arts gallery opening victoria british columbia toronto artist visual art in victoria visual arts