NEW YORK CITY - Ten years and a world of difference. Since its inception as a one-night showcase festival a decade ago, globalFEST, the festival-turned-non-profit arts organization, has moved the needle, helping to bring global sounds from the margins to center stage. What started as a desire to give global music the recognition it deserved on the performing arts scene has opened major venues 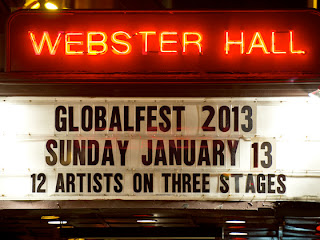 and festivals to international artists with deep roots and modern sensibilities.

Founded by some of the United States’ most informed and engaged global music presenters, gF is co-led by a trio of dedicated volunteer producers/curators: Bill Bragin of Acidophilus: Live & Active Cultures, Isabel Soffer of Live Sounds, and Shanta Thake of Joe’s Pub at The Public. globalFEST celebrates its 10th year on January 13, 2013 at NYC’s Webster Hall (125 East 11th Street), with a dozen vibrant acts from across the world and the sonic spectrum.

Continuing its commitment to supporting artists from the culturally rich, diverse Gulf Coast region since Hurricane Katrina, globalFEST has added the Stooges Brass Bandfrom New Orleans. From second-line parades in the back streets of the Crescent City, collaborations with hip-hop, Cuban, Balkan, and South Asian bands, and performances at festivals across the country, including a guest appearance at globalFEST’s tent at Bonnaroo, the Stooges immerse crowds in the rich musical legacy of New Orleans.

Christine Salem (NYC debut): One of the few female voices of Maloya, a traditional music of the island of Réunion, the rebellious Christine Salem is an extraordinary artist with a unique path. 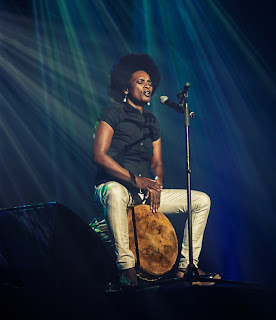 Accompanied by a kayanm, a percussion instrument made from sugar cane flower stems and seeds central to Maloya music, she sings in Creole, Malagasy, Comorian, or Swahili, blending music from the Indian Ocean and African rhythms.

Kayhan Kalhor and Erdal Erzincan: Two masters in their own right join forces for virtuosic, riveting improvisations based on the shared melodies of Persian and Turkish classical forms. Kalhor’s evocative kamanche (spike fiddle) sails over the delicate yet vigorous textures of Erzincan’s baglama (long-necked lute). 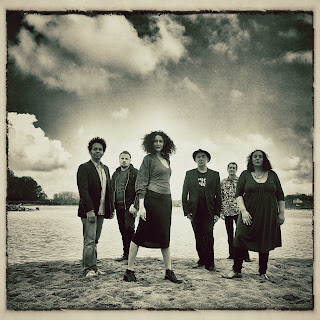 Lo’Jo: Polyglot pioneers of border-defying music from elsewhere and everywhere, the French band synthesizes powerful grooves, delightful vocals, Gallic soul, and influences that range from the Saharan nomad blues of the Tuareg to Balkan beats.

Martha Redbone Roots Project: With a soulful voice and intrepid spirit, Redbone focuses on her Native American and Appalachian roots, drawing on the stirring poems of William Blake and high lonesome sounds to shed new light on old ways.

Oliver Mtukudzi and the Black Spirits: Oliver, known affectionately as ‘Tuku,’ the venerable Afropop pioneer from Zimbabwe has remained a vital, ever-changing part of the African music scene, adored for his beautiful guitar work, rich and husky voice, and positive, uplifting message.

Stephane Wrembel and His Band: 2012 Grammy-nomineeWrembel’s wry, skillful interpretation of the jazz manouche guitar sound, first made famous by Django Reinhardt, has caught the ears of Woody Allen (who used Wrembel’s work in Vicky Cristina Barcelona and Midnight in Paris). His five-piece band summons up the glorious, swinging, bittersweet spirit of Gypsy jazz.

Stooges Brass Band: Winners of the coveted "Best Contemporary Brass Band" at the Big Easy Music Awards, The Stooges have gained notoriety as a full-blown party band whether leading a second-line parade in the back streets of the Crescent City, collaborating with hip-hop, Cuban, Balkan, or South Asian bands, or performing at festivals across the country, including a guest appearance at globalFEST’s tent at Bonnaroo. The Stooges immerse crowds in a high-energy, cut loose vibe that draws from contemporary yet deeply rooted in the rich musical legacy of New Orleans. 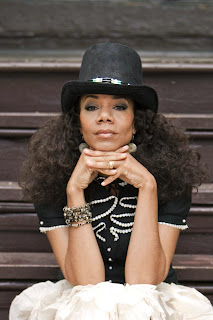 globalFEST has had a ten-year front row seat to the evolution of the music industry, as well as to the ins and outs of cultural exchange with countries spanning the globe. “When we started globalFEST, we wanted to change the presence of world music on the North American market,” explains Thake. “We wanted to move world music more to the center of the performing arts field,” Bragin adds. “We’ve succeeded in many ways.”

Success has meant a packed SXSW venue and a globalFEST-curated stage at Bonnaroo. It has led to creating a day of New York-centric programming at France’s Festival d’île de France, and working with psychedelic visual artists The Joshua Light Show to bring global elements into classical, jazz, and pop/rock lineups.

globalFEST, through its evolution, has discovered that presenting showcases is not enough. Over the past ten years, its organizers have seen how global artists—performers who may straddle genres and use both highly traditional and very innovative elements in their work—move between diverse touring circuits, between non-profit and commercial presenters. globalFEST aimed to expand the appetite of venues that have not traditionally presented “world music” and broaden the scope of those that did. Now a 501(c)3 non-profit organization, globalFEST has also created new ways to support artists funding artists directly through the globalFEST Touring Fund. The Fund, supported by the Ford Foundation, as well as by gF fans via Kickstarter, provides grants to tour-ready artists that help offset the extensive costs of touring in the U.S., providing a stepping stone to new markets.

“It has been thrilling to help this event grow and reinforce not only a sense of Global citizenry but also the cultural exchange between America and the rich musical communities of the Francophone world,” notes Emmanuel Morlet, Director of the Music Office at the French Embassy, one of the festival’s founding and continuing sponsors. “globalFEST has found new ways to connect people across political boundaries, by bringing French artists to the U.S. and now by bringing American artists to France.” 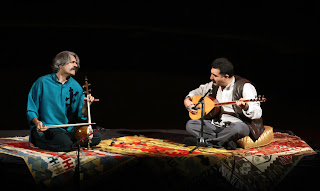 “globalFEST’s role in developing audiences for a wide variety of international music styles and to encourage artistic risk taking in the performing arts field has made significant strides for artists, audiences and venues alike,” explains Soffer. “We hope our mission to encourage cross-cultural exchange, support diverse programming, and develop meaningful cultural diplomacy relationships will create new opportunities within the performing arts field, commercial music scene and beyond.”

globalFEST, Inc. is a not-for-profit production presented in association with Live Sounds, Joe’s Pub at The Public, Acidophilus: Live & Active Cultures and The Bowery Presents. Support provided by The Ford Foundation and The Cultural Services of the French Embassy with additional support from the French Music Export Office, recognizing France’s pre-eminent role as a hotbed of global music activity. Kayhan Kalhor and Erdal Erzincan are presented with support from Cultures of Resistance Network Foundation. Artist visa services are provided courtesy of Tamizdat. Publicity services are provided by rock paper scissors, inc.