NEW YORK CITY - This month, eminent pianist and conductor Daniel Barenboim returns to the United States for a rare American appearance with the West-Eastern Divan Orchestra, the lauded ensemble that he 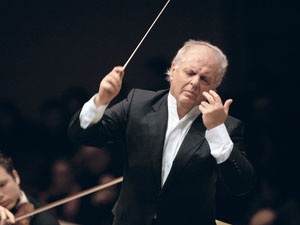 founded in 1999 with the late Palestinian literary scholar Edward W. Said, which comprises young musicians from Israel, Palestine, and other Arab countries. Culminating in four concerts at New York's Carnegie Hall (Jan 30-Feb 3, 2013), during which Barenboim will lead the orchestra in a complete cycle of Beethoven's nine symphonies, the tour also includes the orchestra's debut performance at Boston's Symphony Hall (presented by the Celebrity Series of Boston, Jan 27), as well as concerts and talks at two Ivy League universities: Brown University in Providence, Rhode Island (Jan 23-28) and Columbia University in New York City (Feb 1).

In advance of the Carnegie Hall concerts, two free events are being presented in New York City to celebrate the Divan's arrival. Symphony Space hosts a screening of the Emmy Award-winning documentary about the orchestra, Knowledge Is the Beginning (Jan 27), and NPR Music and WQXR 105.9 FM present Barenboim and members of the Divan in an eclectic chamber music program at the downtown venue (Le) Poisson Rouge (Jan 29). While the orchestra appears frequently throughout Europe during its annual summer tour, the early 2013 dates mark only its second tour to America. The performances are part of the orchestra's multi-year "Beethoven for All" tour, which seeks to take the composer's message of common humanity to audiences around the world. 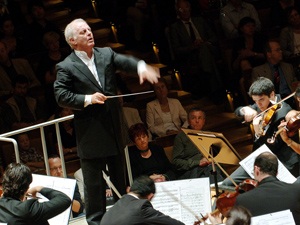 Daniel Barenboim and Edward W. Said created the original West-Eastern Divan Orchestra workshop in 1999 with the aim of fostering intercultural exchange between Israelis and Arabs and creating an opportunity for them to work together on a matter of common interest: music-making at the highest level. The founders named the orchestra and workshop after a collection of poems by German scholar and author Johann Wolfgang von Goethe titled West-Eastern Divan, which Barenboim and Said considered a central work in the evolution of the concept of world culture.

Over the years, the West-Eastern Divan Orchestra has matured into a world-class ensemble, performing at leading international concert halls and music festivals and releasing a number of critically acclaimed recordings. In 2006, the orchestra made its New York debut at Carnegie Hall. Maestro Barenboim and the West-Eastern Divan last performed the full Beethoven symphony cycle in July 2012 at the BBC Proms as part of the London 2012 Festival, the cultural celebrations of the Olympic Games. To coincide with the Proms appearances, Decca released a box set recording of Barenboim leading the orchestra in all nine symphonies, titled Beethoven for All: Symphonies 1-9. Launched in 2010 at the Teatro Colón in Buenos Aires, the orchestra's Beethoven for All tour will have spanned four continents by 2013.

In an event to kick off their New York residency, members of the West-Eastern Divan Orchestra and Daniel Barenboim appear at Greenwich Village's (Le) Poisson Rouge on Tuesday, January 29, presenting an eclectic evening of music from the Western classical and Middle Eastern traditions. Featured performers on this program include two rising stars of the Divan who are quickly gaining international reputations as soloists: clarinetist Kinan Azmeha and violinist Michael Barenboim, Maestro Barenboim's youngest son. The concert will be webcast live online by NPR Music at www.npr.org/music and by WQXR 105.9 FM: New York's classical music radio station at www.wqxr.org. Ticket information will be available online by the co-presenters NPR Music, WQXR, and (Le) Poisson Rouge. Doors open at 7pm, and the concert and live video webcast begin at 8pm. 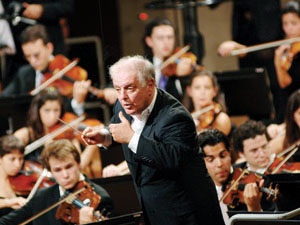 The orchestra's Carnegie Hall series begins on Wednesday, January 30 at 8pm with Maestro Barenboim conducting Beethoven's First, Fifth, and Eighth Symphonies. The Third and Fourth Symphonies follow on Thursday, January 31 at 8pm. On Saturday, February 2 at 8pm the orchestra performs the Sixth and Seventh Symphonies before concluding the cycle on Sunday, February 3 at 2pm, with the Second and Ninth Symphonies. The all-star quartet for the performance of the Choral symphony comprises soprano Diana Damrau, mezzo-soprano Kate Lindsey, tenor Piotr BeczaÅ, and bass René Pape. They are joined by the Westminster Symphonic Choir under the direction of Joe Miller. The Barenboim-Said Foundation USA will host a benefit reception with Daniel Barenboim, Mariam C. Said, and members of the orchestra in the Shorin Club room at Carnegie Hall immediately after the concert on Saturday; tickets to the reception are available by calling (347) 689-9429.

The final concert on February 3 will be aired on WQXR 105.9 FM: New York's classical music radio station and on stations nationwide as part of the Carnegie Hall Live broadcast and digital series, produced by WQXR and Carnegie Hall in collaboration with American Public Media and hosted by WQXR's Jeff Spurgeon and American Public Media's Fred Child. Concerts in the series are available for live streaming on wqxr.org and carnegiehall.org/wqxr. During every live broadcast, WQXR, Carnegie Hall, and digital partner NPR Music host live web chats including Twitter commentary by the broadcast team from backstage and in the control room, connecting national and international fans to the music and to each other.