Infinithéâtre Presents:
Kafka's Ape
Written by Franz Kafka
Based on Kafka’s short story, A Report to an Academy
Adapted from the original German by Guy Sprung 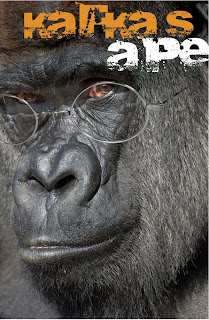 MONTREAL - Captured on the Gold Coast and imprisoned in a cage, Redpeter’s only escape route is to become a walking, talking, spitting, hard-drinking member of the Peace Industry, the entrepreneurial world of mercenary soldiers - the single biggest growth industry of the 21st Century. In detailing the journey of his enforced evolution from apedom to humandom, Mr. Redpeter is a living embodiment of the irony that perhaps now he is more animal than he ever was as an ape.