(HAMILTON, ON - January 14, 2013) This show - the latest in our World Music Series - provides a unique blending of Latin American rhythms and classical guitar. Come out for a great musical 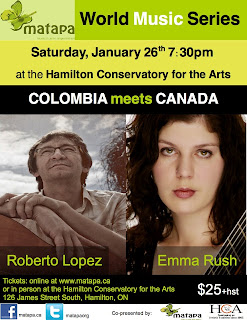 conversation between Roberto López and Hamilton's own Emma Rush and be ready to move your feet. You’ll warm to powerful Afro-Colombian and Afro-Cuban rhythms mixed with classical guitar, hip-hop, boogaloo, jazz, electronica - all on one stage. Join us for an evening sure to brighten the mid-winter blues at the venerable Hamilton Conservatory for the Arts. 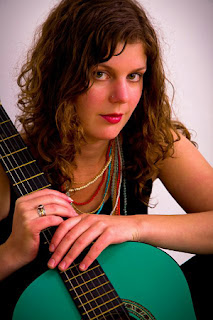 instruments before discovering a love for the guitar. After initial studies, Emma Rush moved to Nova Scotia to complete an undergraduate degree at Dalhousie University in Halifax. During her years in Halifax, she was active in playing solo and chamber music concerts and performing to great acclaim in numerous master classes. She quickly became known for her warm sound and expressive playing. Emma Rush is now based Hamilton where she maintains a busy teaching studio in additional to faculty appointments at Redeemer University and Mohawk College. She performs throughout North America and Europe and appears regularly at international guitar festivals (Iserlohn, Acadia, Sauble Beach).
The Organization
MATAPA Music & Arts Organization is an incorporated Canadian non-profit organization located in Hamilton, Ontario, Canada. Our goal is to establish Hamilton and Southern Ontario as a vibrant cultural area by promoting the best in music and arts from around the world.  We believe that the arts are a critical site of social and political resistance and Matapa aims to foster cultural exchange between Canada and the global south. Memberships and any donations will go towards our ongoing programming and efforts to spread the news about global culture
• Buy tickets online: http://www.brownpapertickets.com/event/308664