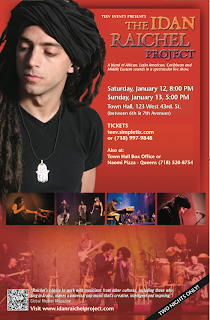 This one-man Middle East peace accord makes music that is an ambitious celebration of multicultural diversity. The ethnic elements are cleverly rewired with modern grooves to create an ambient journey that thrillingly bridges the traditional and the modern. - The Times (London, UK)

NEW YORK CITY - Since bursting onto the international music scene in 2003, The Idan Raichel Project has shattered expectations of Israeli pop with their unique blend of African, Latin American, Caribbean, and Middle Eastern sounds, coupled with a spectacular live show.  The project continues to push musical boundaries garnering strong critical praise and winning over audiences worldwide.  On January 12 and 13, the complete 12-musician lineup will be headlining two evenings at the prestigious Town Hall in New York City during the APAP conference. The Idan Raichel Project will be performing their biggest hit songs alongside new material from their upcoming album which will be released later in 2013.

Idan Raichel, the creator and leader of the Project, began his musical journey by inviting collaborations from artists of different generations, multiple ethnicities and singing in languages as diverse as Hebrew, Spanish, Arabic, Amharic and Swahili. The resulting albums shattered sales records in Israel, made Raichel his country’s biggest musical breakthrough, and sold over half a million records worldwide. The Idan Raichel Project has headlined some of the world’s most prestigious venues, including New York's Central Park SummerStage, Radio City Music Hall and The Apollo Theater, Los Angeles’ Kodak Theater, the Sydney Opera House and the Bataclan in Paris. They have also performed across Europe, 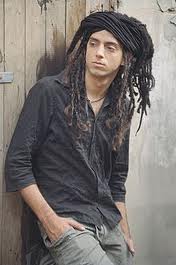 The Idan Raichel Project has collaborated with many different artists from around the world, including Mayra Andrade from Cape Verde, Marta Gomez from Colombia, Ana Moura from Portugal, German counter-tenor Andreas Scholl and Vieux Farka Touré from Mali. Recently, Raichel formed The Toure-Raichel Collective with Touré and released The Tel Aviv Session in March 2012. The result of an inspired afternoon jam session in Tel Aviv, the album was hailed by the media as “a masterpiece” (about.com), “simply divine” (Giant Step), “deeply affecting” (The Wall Street Journal), “a cross cultural triumph” (Time Out Chicago) and “the best album this year” (Pop Matters).

Currently, Raichel is working with GRAMMY winner India.Arie on their joint recording project Open Door. Idan and India have become close friends and collaborators since they met in 2008 when India was visiting Israel. They performed their song “Gift of Acceptance” at the 2010 Nobel Peace Prize gala event in Oslo, Norway, and in August 2011 they performed together at the dedication ceremony for the Martin Luther King Jr. Memorial in Washington DC. India and Idan toured the US together in 2011.

Don’t miss this opportunity to catch what the Boston Globe calls “a fascinating window into the young, tolerant, multi-ethnic Israel taking shape away from the headlines.” 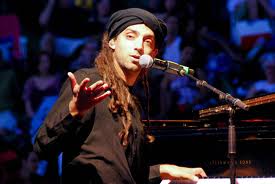