• Single tickets available anytime via our box office by calling  416-973-4000 , Tuesday to Saturday, 1-6pm, or online at harbourfrontcentre.com/worldstage/tickets
• Ask about group & other discounts

TORONTO - The 2013 season of Harbourfront Centre’s signature contemporary performance series, World Stage, is around the corner and the line up has already garnered critical acclaim. The Toronto Star

says it’s "...theatre that will challenge, astonish, and stimulate”. From February 19 until May 24, the world’s performance leaders are in town for four to five show engagements, so take advantage of this chance to see select works from provocative and cutting-edge international and Canadian contemporary artists.

Tina Rasmussen, World Stage Artistic Director notes "I am proud of continuing the legacy of World Stage for Toronto audiences by programming another inquiring season of leading performance from Canada and around the world. I believe in certain tenants in programming work that asks the audience to evaluate their role as witness, as citizen, and as human. In the contemporary performance programmed in World Stage 2013 we can offer a renewal of perception and seek new understandings, propose a new hierarchy, introduce chaos and even have a bit of fun."

This season welcomes productions and artists from Canada, Germany, Côte d’Ivoire, Brazil, Australia, China, Norway, Belgium, Portugal and the Netherlands, making it one of the most diverse seasons in its 27 year history. The work proposes to redefine the act of witnessing, as it chronicles a day in the life in 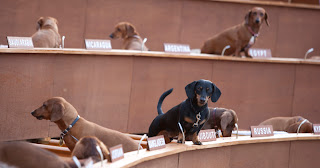 Auschwitz in KAMP (CAMP) and throws us to the dogs in Dachshund UN.

Shakespeare is turned on his head in a triptych of works that make the Bard relevant, immediate and moving with Toronto’s own LEAR, and a German piece, She She Pop & Their Fathers: Testament.

Dance is always featured prominently in the series with last years presentation of Wayne McGregor | Random Dance ENTITY making it to number one in NOW Magazine’s Top 5 Dance Shows of 2012. This begs the question, which of the six knockout dance shows featured this season will top the lists in 2013!? Get ready to rally around Norway’s A Dance Tribute to the Art of Football, witness the physical demands of friendship with Still Standing You, feel the power of contemporary expression from superpower China with TAO Dance Theater, and warmly welcome the return of Brazil’s dance heavyweights Grupo Corpo.

As a pioneering culture port, World Stage’s commitment to developing Toronto artists continues with bold new work from Ame Henderson/Public Recordings in what we are saying, and Heidi Strauss/Toronto Dance Theatre with Everyday Anthems. 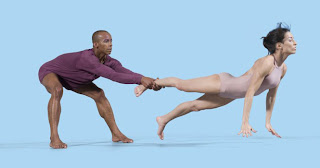 Grupo Corpo (Brazil)
February 19-23, 2013
Two spectacular dance productions from this world-renowned company.
In Sem Mim, meaning “without me,” “tattooed” dancers merge the rhythm of the sea with the music of medieval Portuguese-Galician chants. The second work, Ímã, meaning “magnet,” takes inspiration from the law of magnetism where dancers passionately entwine and separate in poetic polarities.

Always a hit with World Stage audiences, Grupo Corpo combines classical ballet technique with a contemporary re-reading of Brazilian and world dance forms. The end results are performances that are virtuosic, athletic and simply breathtaking.

Dachshund UN
Bennett Miller (Australia)
Production Sponsor: PawsWay
February 28-March 3, 2013 Enwave Theatre, 50 mins
Shock, delight, cacophony! A meeting of the United Nations Commission on Human Rights is staged with the help of specially recruited dachshunds in this wild performance installation. Joyful and chaotic, spectacular and fascinating, Dachshund UN questions our capacity to imagine and achieve a universal system of justice. Creator Bennett Miller is a sculptor and installation artist whose aim is to create theatre as a political arena by exploring active viewership and durational performance. Admittance to this show is free on a first-come, first-serve basis. Performances will also be webcast. If you have a dachshund and want to 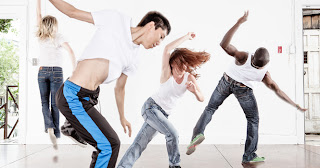 world premiere
LEAR
Philip McKee (Canada)
March 5-10, 2013
Canadian performance legend Clare Coulter steps into the title role of Shakespeare’s King Lear in this intimate and powerful portrait of passing on a legacy, in a family and in the theatre. A reinvigorated and sensitive overturning of a timeless tragedy. LEAR originally appeared as part of Harbourfront Centre’s HATCH performing arts residency programme in 2011. For more information about HATCH, visit harbourfrontcentre.com/hatch.

Everyday Anthems
Toronto Dance Theatre (Canada)
March 6-9, 2013 Fleck Dance Theatre, 70 mins
Choreographed by rising star Heidi Strauss, along with text from playwright Brendan Gall, this new dance work explores anthems as a metaphor for overcoming obstacles, for things unrequited, for personal strength and belonging. An impassioned performance that poses questions around power, pride and unity in the face of difference. Strauss’s first creation for Toronto Dance Theatre draws on the embodied histories of her performers to create a richly physical ensemble work. Toronto Dance Theatre, under the artistic direction of Christopher House, is recognized for intelligent choreography and the exceptional artistry of its dancers. 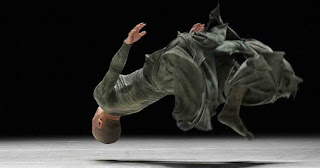 Weight x3 & 2
TAO Dance Theater (China)
Production Sponsor: ManuLife Financial
March 20-23, 2013 Fleck Dance Theatre, 90 mins, including intermission
Two incisive works by China’s emerging leaders of contemporary dance that shatter expectations. Weight x3 is a triptych of pieces concerned with stretching the boundaries of physical practice. In 2, the dancers’ bodies fold, collapse, invert and mirror each other to convey the movement (and rigidity) of language. Since its inception in 2008, TAO Dance Theater has established itself as one of the most provocative contemporary dance companies in China. Through rigorous, sincere, and exploratory corporeal research, they are discovering the body’s unknown possibilities and taking Chinese dance in bold new directions.

A Dance Tribute to the Art of Football
Jo Strømgren Kompani (Norway)
Production Sponsor: BMO Financial
April 10-13, 2013 Fleck Dance Theatre, 60 mins
A series of comic, tough and tender vignettes celebrating the world’s favourite game in which the form and physical patterns of football (soccer) are deconstructed. This work offers an opportunity to reflect on the similarities and differences between sport and art. Behind slow-motion replays and locker room rituals lurks 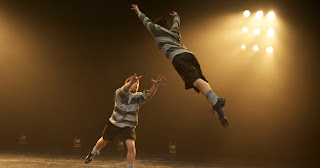 She She Pop & Their Fathers: Testament
She She Pop (Germany)
April 17-20, 2013
Mirroring the story of King Lear and his daughters, She She Pop members take to the stage with their own aging fathers to enumerate their inheritances and negotiate how power, money, memory and love are passed along across the generations. With the drive of a game show, this heart-wrenching and humourous work strives to find the intersections of responsibility and respect between parents and children.

In German with English surtitles. Suggested age: all ages.

Still Standing You
Pieter Ampe & Guilherme Garrido/CAMPO (Belgium/Portugal)
April 23-24 & 26-27, 2013 Enwave Theatre, 45 mins
Unadorned, hilarious, moving and disturbing. With the instruments of their bodies, this Belgian Portuguese duo offers a mischievous glimpse into the kaleidoscope of friendship. From slaps on the back to violent strokes of a leather belt, the pair tests the strength of their relationship. The artists invite the audience to consider associations of touch, tenderness, violence and struggle between the bodies of men. CAMPO, which brought That Night Follows Day to World Stage audiences in 2009, is a Ghent-based art centre that 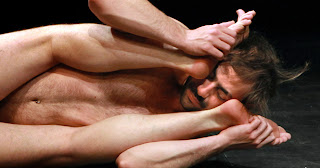 creates and presents work at all stages of development on a national and international scale.
Advisory: contains full frontal nudity

what we are saying
Ame Henderson/Public Recordings (Canada)
Presented in association with The Power Plant
May 23-26, 2013 The Power Plant, 60 mins
Expanding upon findings from 300 Tapes and relay, Public Recordings asks: "What can we say about our future and how do we say it together?" Using language and movement to explore new perspectives of our world and each other, an assembly of performers responds to uncertainty, potential danger, and possibility in an unobstructed performance space. Since 2003, widely-acclaimed Public Recordings has been supporting and promoting the works of dancemaker Ame Henderson and her collaborators. The Power Plant, part of Harbourfront Centre, is Canada’s leading public gallery devoted exclusively to contemporary visual art.

KAMP (CAMP)
Hotel Modern (Netherlands)
May 23-26, 2013 Enwave Theatre, 60 mins
With an enormous scale model of Auschwitz filling the stage, thousands of eight-centimetre-tall handmade puppets represent the prisoners and their executioners. The performers move through the set like giant war reporters, or silent gods, filming the horrific events with miniature cameras. The audience becomes witness. Hotel Modern attempts to imagine the unimaginable: the greatest mass murder in history, committed in a purpose-built city. Established in 1997, Hotel Modern blends visual arts, puppetry, music and film in evocative productions by representing harsh reality in a refined poetic manner.

Indie Alt-Rock Galactic Fuzz: Galactic Fuzz (Independent / 28 October 2022 Stream The Single Transparent Transparent is the preview release for the eponymous upcoming album by Galactic Fuzz. It's an alt-rock track with an instantly recognizable feel, driven by insistent guitar rhythms. The verse has an earworm groove, but then takes a detour into the interesting rhythms and contrapuntal vocal lines of the chorus. It's alt-rock with an intellectual approach to the music that adds intriguing texture. My one quibble would be that the vocals could come up louder in the mix - the lyrics sound interesting... I think, and those great vocal effects are somewhat muted.  Vocalist/guitarist and songwriter Javier Guell says in a media release, "I've always loved singing, but had mostly been a backup singer and lead guitar player in all my bands. The inception for Galactic Fuzz was my decision to sing my own songs for a change, as I had always written for others to sing.  The name