TORONTO – The Winterfolk Blues & Roots Festival returns once again to  Toronto’s DELTA CHELSEA HOTEL for the upcoming ELEVENTH ANNUAL WINTERFOLK FESTIVAL which will take place from FEB 14-17, 2013. Some of the finest folk, roots, world and blues artists will perform at the Delta Chelsea’s Monarchs Pub, Market Garden Stage and various other stages all within the hotel.

All stages are indoors, under one roof, featuring quiet listening rooms.Winterfolk is a Free Festival with some paid stages.Come for Winterfolk – Stay for the Annual Folk Alliance Conference Immediately Following in the same venue.

Toronto’s Winterfolk X festival will present a fun, jam-packed, free, all-ages, mid-winter, weatherproof urban blues and roots festival. The new venue proved to be a huge success last year and will continue to present all kinds of fresh opportunities. The Delta’s management and staff are thoroughly supportive and

excited about the recent collaboration. The hotel’s involvement in Toronto’s music scene is ever-growing and they have regular music events scheduled every night of the week in Monarchs Pub, so many in the music community are already familiar with the great vibe happening there.

The Winterfolk XI Blues & Roots Festival is thrilled to announce several feature showcases this year including one with SONNY OCHS (sister of ‘60s legend Phil Ochs). Sonny pays tribute to her late great brother along with Jon Brooks, Eve Goldberg, Noah Zacharin, D'Arcy Wickham, Brian Gladstone, David Newland, David Essig, Tony Quarrington and Sebastian Agnello all singing their favourite Phil Ochs tunes. Setting the mood beforehand will be folk duo Sue & Dwight performing the Winterfolk edition of their “Where Have All The Folk Songs Gone?” musical revue, from 1-2 p.m. The full 1– 4 p.m. showcase to be held in the hotel’s Mount Batten Room on the second floor, is one of the few ticketed events at the festival. 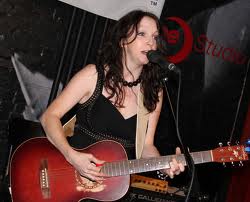 Two very new features include the debut performance of the men of THE FABULOUS WHITELEY clan, and a live recording event with emerging Peterborough singer-songwriter GRAINNE.

Ken, Chris, Ben, Dan & Jesse Whiteley will gather on Friday, February 15th, for a special performance never before seen on any stage. The fellas are sure to wow audiences while utilizing banjo, piano, mandolin, bass and more, to achieve a testosterone-laden extravaganza of sound

Grainne’s Winterfolk set will be a live, off-the-floor recording session – another first for the festival – and will be backed by well-established roots artists including Gladstone (producer for the album), who will be on guitar and banjo for a few tunes. Added to the mix will be Juno award-winning guitarist Tony Quarrington on 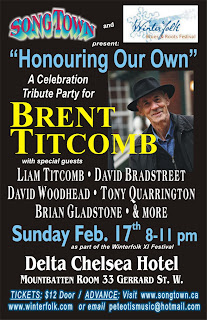 six-string and mandolin as well as Beverly Kreller (of award-winning HOTCHA! fame), who will provide percussion and backup vocals.

MORE ABOUT WINTERFOLK
Winterfolk was formed to entertain, educate, enlighten, engage and encourage the community about various folk music styles including roots, blues, folk and more. Founded by Festival Director Brian Gladstone, it is run as a division of The Association of Artists for a Better World, a registered non-profit organization in the Province of Ontario, Canada.