TORONTO - Join Amnesty International Toronto's Reel Awareness/Films for Change and the AI UofT Group  for an inspiring night of film as we present the Oscar-nominated film Rebelle (War Witch). 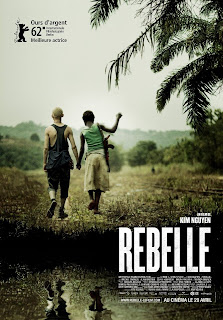 The story follows Komona, a 14-year old girl in sub—saharan Africa, who was kidnapped forced into a rebel army. The film is a moving portrait of a child soldier from Canadian director Kim Nguyen. The screening will be followed by a Q&A session focused on endemic issues related to violence against women both in Canada and abroad ( speakers TBA).

The film was Canada's entry in the Best Foreign Language Film category at the 85th Academy Awards and was the top winner at the 2013 Canadian Screen Awards, garnering 10 awards including Best Picture, Best Director, Best Actress and Best Supporting Actor.