CD Release: The Battle of Santiago's 'Followed by Thousands' March 5 2013

THE BATTLE OF SANTIAGO – FOLLOWED BY THOUSANDS
(March 5th, 2013 on MWPC Records)

The Battle of Santiago: Call it a sound clash with a victorious outcome. This Toronto-based instrumental ensemble comprises seemingly disparate musical elements. Out of potential conflict, however, comes a bracingly refreshing new sound that is quickly turning ears. 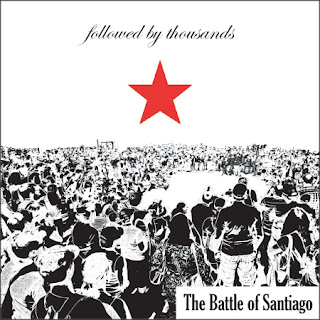 Group founder Michael Owen explains “Within The Battle of Santiago (TBOS) we have a Latino section and a Canadian section. Everyone comes with such a variety of experiences. That can create something of a battle within the group, I think that kind of energy or tension creates a really good environment. You can feel the push and pull.”

The Latino component of TBOS comprises Venezuelan-born Joel Perez and Cuban-born and raised Reimundo Sosa. They were both studying and performing percussion in their homelands before they were even teens, and they bring a wealth of rhythmic experience to the group. The Anglo section comprises bassist Michael Owen, saxophonist/flautist Michael Butler, and guitarist/sonic manipulator Lyle Crilly.

Full Colour was the title of the 2011 full-length debut of TBOS. Preceded by an EP that quickly made converts at campus radio, the debut album hit No. 14 on the Top20 national Canadian college radio charts, spending four consecutive months in the National Top 20.

The Battle of Santiago has also quickly earned a reputation as a dynamic and exhilarating band live, one that uses video and lighting to striking effect. In partnership with artist/designer Patricio Davila, the group integrates digital visual art, live musical performance and audience interaction, creating an organic audio / visual installation designed to stimulate the senses in vivid fashion.

A second full-length album, Followed By Thousands, is set to be released on March 5, 2013. Followed 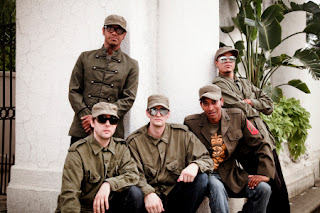 by Thousands is “a record that helps define our sound and our direction,” notes Owen. It will feature new compositions alongside inventive remixes of earlier material. One such remix, of “Jackson Rain,” showcases noted Toronto artist Lady Son on vocals and percussion, and gives the track a reggae treatment. Also being remixed in three versions (a dub, club and down-tempo mix) is “According To Legends,” the opening track on their previous release Full Colours.

The Battle Of Santiago’s unique music blend is simultaneously rhythmic, ambient and atmospheric; a tricky combination they achieve with graceful ease. TBOS are not sonic purists: “I’m not a world or Latin music guy. I’ve always produced rather ambient experimental music,” Owen explains, “we’re not doing Latin rock like Santana, we’re not doing orthodox post-rock because we’ve got these Latin rhythms, and it’s not traditional Afro-Cuban either.”

Progression and excitement are twin pillars of The Battle of Santiago mandate. Following their artistic progress promises to be an exciting pursuit.