Twenty-three year old Russian pianist Pavel Kolesnikov was named the 2012 Honens Prize Laureate at the Honens Competition Awards Show on 26 October 2012 and this CD, released on Honens' own label, gives you his semi-final and final round performances as they happened live.

It includes solo performances as well as a chamber piece and concerto with a full orchestra. The track list:

DISK ONE:
BEETHOVEN Sonata No. 14 in C-sharp minor Op. 27 No. 2 “Moonlight”
SCHUMANN Kinderszenen Op. 15
CHOPIN Sonata No. 3 in B minor Op. 58
- From the Semifinals: Recital Round - Solo Recital

DISK TWO:
TCHAIKOVSKY Piano Concerto No. 1 in B-flat minor Op. 23
- From the Finals: Concerto Round (with the Calgary Philharmonic Orchestra under the baton of Roberto Minczuk)
MENDELSSOHN Sonata for cello and piano No. 2 in D major Op. 58
- From the Semi-Finals: Collaborative Recital (with Johannes Moser)

The Romantic repertoire is uniquely suited to Pavel's gifts - a style of playing that's both technically clean and emotionally tender, with a playful quality to his performance that illuminates the spirit of the music. The Honens International Piano Competition offers the world's richest prize of it's kind - a cool $100,000 top prize along with a series of prizes for semi-finalists - so it's no surprise that it has attracted the real cream of

the crop of young talent in the classical piano field since it's inception in 1992.

The first CD of solo pieces showcases the complete ease with which he tackles the emotional and technical range of the Romantics. His rendering of the familiar Beethoven Moonlight Sonata is full of expression underneath its adroit brilliance. He shifts moods easily and truly dazzles on occasion; the third movement (Presto Agitato) is a stand out. Schumann's Kinderszenen (Op. 15) is a showcase for his mix of skills. He plays them with drama and flair and - with a $100k purse on the line - actually sounds like he's having fun with them. His Chopin is fluid but imbued with just the right shade of gravitas too - above all, you feel the sparkling, lyrical beauty of the piece and that's just the point.

Disk Two features Pavel with other musicians and his gift of sensitivity is no less at work. He plays the Tchaikovsky concerto with a great sense of panache, fully conscious of the power of the music and its theatricality, bringing it to a rousing flourish at the end. He captures the varied moods of Mendelssohn's concerto, performed with cellist Johannes Moser, from its bright and exuberant opening through its more reflective end. 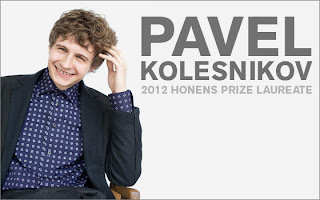 Pavel seems to possess an organic sense of all the music - it lives in him in what must have been remarkable live performances. In fact, you will forget the circumstances of the competition until the wild applause at the end of each piece.

He began music studies with violin and piano at age six, and played both instruments before concentrating solely on piano after ten years.  Pavel currently studies at Moscow State Conservatory with Sergey Dorensky and at London’s Royal College of Music with Norma Fisher and has been playing as a soloist and chamber musician throughout Europe since his recital debut in 2008. Interestingly, he is also passionate about literature and writes short stories.

About Honens
In 1991, philanthropist Esther Honens established the Honens International Piano Competition Foundation in her hometown of Calgary, Canada with a gift of $5 million CAN.  Her dream was to discover and launch the careers of the world’s most promising pianists—a dream that has become a Canadian success story.  Honens winners are critically acclaimed throughout the world and the triennial Competition awards the largest prize of its kind—$100,000 cash and an artist development program valued at a half million dollars. The Eighth Honens Competition takes place in 2015.