Farmers vs. Big Oil: Trouble in the Peace Opens March 1 in Vancouver, March 8 in Toronto 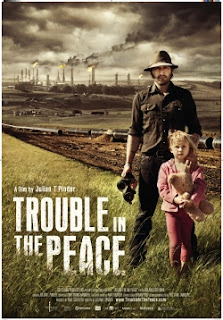 “Eco-terrorist” or Enviro-freedom fighter?
The Peace River Community Goes To War in
Trouble In The Peace
a film by Julian T. Pinder

Trouble in the Peace is supported by the release of a companion video game called Pipe Trouble (available online and for select tablets in March - www.pipetrouble.com )

(Toronto)  On horseback, herding cattle, farmer Karl Mattson evokes the Old West. And as in the Old West, the law can seem meaningless as “homesteaders” clash with those who covet their land.  But in the 21st Century, in Northern B.C.’s Peace River Valley community of 50,000, the “black hats” he sees are oil and gas companies. And when Karl warns, “People are going to get killed,” the subject is toxicity, not gunfights. 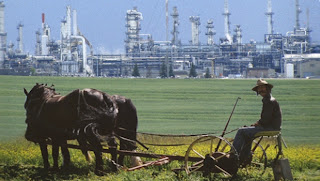 Julian T. Pinder’s documentary Trouble In The Peace is about a natural gas flare-up in more ways than one – with flaming wells, fire-bombs and a population divided with many feeling themselves getting sicker with every flare of sour gas.

The conflict: a provincial government that depends on massive revenue from the fossil fuel industry and the sale of sub-surface mineral rights, offers little solace to increasingly angry Peace River citizens, short of advice to duct tape their windows.  Petitions and lobbying are ignored. But the province finally takes notice: when a series of mysterious pipeline bombings take place. A bounty of $1 million is offered up, one that threatens to create a rift in the community, but ultimately becomes a symbolic insult around which it can rally.

In the end, Trouble In The Peace evolves into a symbol of a quandary we all share, living as we do in a world ravenous for cheap, non-renewable energy. As that energy becomes more difficult to obtain, and the stakes become higher, what and who will we be willing to sacrifice to get it. And what will we lose 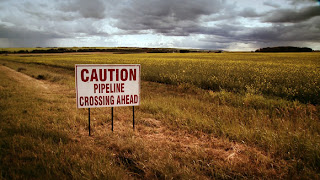 as a society as a result?

“This film inhabits similar territory to my last film, Land,” says director Pinder, “where personal dreams, failures, motivations, and intentions are the focus within a much greater context. Individuals make up the world. And people, not oil, nor the environment, nor territory, are at the core of every conflict, global or local.``

Preceded by pre-release controversy, Trouble In The Peace has its theatrical release in March, with dates at the Royal (March 8-10), and in Vancouver at Vancity (March 1-6).

Produced by Six Island Productions in association with TVO and with the participation of the Ontario Media Development Corporation and Rogers Documentary Fund, and with the assistance of the Shaw Media-Hot Docs Fund and the Ontario Arts Council.

Trouble in the Peace is supported by the release of a companion video game called Pipe Trouble (available online and for select tablets in March - www.pipetrouble.com).  Pipe Trouble takes a clever new spin on an old arcade classic and uses over-the-top satire to prompt larger mainstream discussion for ongoing real-world issues surrounding the exploitation of natural gas.  Tasked with building their own pipeline, players try to balance the financial demands of using the least pipe to make the most money against the impact on the local environment and neighbouring farms.

Note - the video embed is from Vimeo and as such I find I often have to refresh my screen once or twice to get it to pop up, so if you don't see it right away, give refreshing a try.

TROUBLE IN THE PEACE trailer for a documentary 1:43 from Six Island Productions on Vimeo.
documentary film films about the environment gas industry in alberta royal cinema toronto toronto film screening