Daniel Brooks directs at the Bluma Appel Theatre
from April 7 to May 5, 2013

Toronto, ON – Acclaimed actor and international film and television star Jason Priestley (Call me Fitz, Beverly Hills, 90210) returns to the stage in his first live theatre role since 2000 in Canadian Stage’s production of RACE, by award-winning playwright David Mamet. Directed by Daniel Brooks and 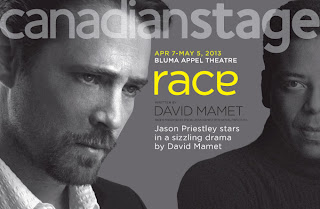 co-starring Matthew Edison (Murdoch Mysteries, Saving Hope), Cara Ricketts (Stratford Festival, Cruel and Tender) and Nigel Shawn Williams (Topdog/Underdog, Cruel and Tender), the play will be on stage at the Bluma Appel Theatre from April 7 to May 5, 2013 (opening and media night: April 11).

“Performing live on stage is an incredible thrill, especially when given such an exhilarating role,” said Priestley, who will play shrewd lawyer Jack Lawson. “I am very excited to get back on stage with a group of very talented Canadian performers.”

RACE, programmed as part of the theatre company’s 25th anniversary season in a nod to the organization’s roots (the first play featured by the newly amalgamated Canadian Stage 25 years ago was Mamet’s Glengarry Glen Ross), is a gripping and provocative drama written to spark debate. When the wealthy (and white) Charles Strickland (Edison) is accused of raping a young black woman, he seeks representation from the only lawyers in town willing to take his case – a firm that boasts two ruthless, whip-smart attorneys – one white, one black. With crackling wit and shocking dialogue, Mamet lays bare a corrupt legal system and a simmering sexual and racial rage that permeates North American culture. 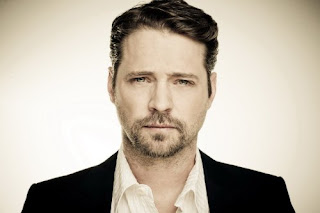 “Mamet’s play is loaded with social, racial and gender-based politics that he presents through this script as an addition to our society’s discussion of race,” said Artistic & General Director Matthew Jocelyn. “With the careful, creative guidance of Daniel Brooks and the precise work of an exciting and brilliant Canadian cast, we hope that sharing this tough and compelling piece helps contribute to this important conversation.”

Along with the play itself, Mamet offers specific details outlining production regulations, from guidelines about set pieces, sound cues and lighting to parameters around post-show conversations. Set and costume designer Debra Hanson creates a simple, non-realistic office space that focuses on the rhetorical arguments posed throughout the show.

RACE will be on stage at the Bluma Appel Theatre (27 Front St. E). Performances run Tuesday through Saturday at 8 p.m. with matinees on Wednesday at 1:30 p.m., Saturdays and Sundays at 2 p.m. The performance runs 100 minutes with no intermission. Tickets from $24 to $99 are available online, by phone at 416.368.3110 or in person at the box office. For details visit www.canadianstage.com.

About RACE
A Canadian Stage Production; April 7 to May 5; Opening night: April 11
RACE is presented by special arrangement with SAMUEL FRENCH, INC.