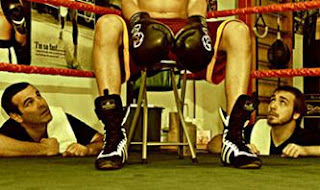 MONTREAL – Rabbit in a Hat Productions in collaboration with Infinithéâtre presents a remount of Jim Burke’s Cornered directed by Paul Van Dyck and starring Howard Rosenstein and Christopher Moore. At Bain St-Michel from March 6th to March 17th.

A nasty, brutal comedy set in a seedy Manchester gym. Rex and his apprentice, Vinnie, are two corner men working a youth boxing tournament. Their boy, Little T, is the favourite to win, but the sinister gangster Doxy has other ideas. Unaware of each other’s agenda, Rex and Vinnie seek to take advantage of Doxy’s activities. But nothing is what it seems, and the two incompetent corner men’s attempts at fancy footwork leave them both sprawling on the ropes.

The award-winning play received a short but stellar run at Theatre St-Catherine in November, 2011. With the help of Infinithéâtre and an onslaught of critical and audience acclaim, this well deserved remount was inevitable.

Writer Jim Burke provides the script, which won The Manchester News Theatre Award for Best New Play in 2000. “It’s not really a boxing play,” explains Burke, “It’s about people on the outskirts of boxing. Kind of on the ropes, looking in. We never see the fight, only the before and after.” Burke himself has never boxed. When he was growing up in Manchester, England, he briefly considered taking boxing lessons in order to protect himself, but decided against it. He wrote Cornered about 12 years ago and was pleasantly surprised when it won the award for best new play. One of his previous works, an adaptation of Herman Melville’s Moby Dick had previously won the same award. Now 51 and the father of two, Burke moved to Montreal six years ago, partly for family reasons (his wife was born here). He teaches English and creative writing at Dawson College. The expression ‘corner man’, which he noted while reading an article on Muhammad Ali, triggered the play: “It rang a Samuel Beckett chord. Something about watching from the fringes as an outsider waiting for something to happen. It’s kind of a comedy. The corner men are a little inept, a little bit Laurel and Hardy. It’s not a very macho, testosterone type of play. It’s basically about good intentions being corrupted.”

Hot on the heels of the ambitious and beautiful Oroonoko at The MAI, Paul Van Dyck (Miss Sugarpuss Must Die!, Haunted, Paradise Lost) directs this walloping two-hander. His attraction to the play came from his first read. “The script is a phenomenally beautiful two-hander. Lots of plays have whistles and bells but no substance. Cornered is a complex story, simply told. The writing turns slang into poetry and two pathetic, desperate buffoons into surprisingly sympathetic anti-heroes. On the surface, Cornered is a hysterical black comedy, but at its heart is the hopeful message that although we live in a world where corruption runs rampant at every level of society, despite the devastating consequences, there exists the courage to come clean.”

Despite Rex’s gruff exterior, Rosenstein feels “you have to learn to love your character. Rex doesn’t necessarily see himself as a bad person, so neither can I.” Vinnie, played by Moore, is “a wannabe thug.” He’s younger and gets a lot of abuse from Rex, as the weaker member of the team. “He’s always on the outside looking in. He seeks acceptance, especially from Rex, and I think we all want to be accepted by the people we look up to.” The first thing both actors noticed about the play was the Manchester accents they would have to adopt. Both Moore and Rosenstein were prepared for the challenge, understanding they would have to master the skill in order to properly capture the spirit of the characters. Rosenstein has a great amount of respect for the play itself and hopes to do justice to the story. “It’s a really well written, smart drama and we’re going to honour it.”

With multi award-winning lighting designer Jody Burkholder and stage manager Anne-Marie Pierre rounding out the team, Cornered is sure to be another knockout in its new digs at Bain St-Michel. 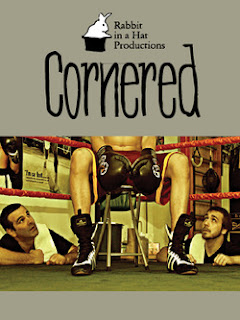