"It takes two people to make you, and one people to die. That's how the world is going to end." 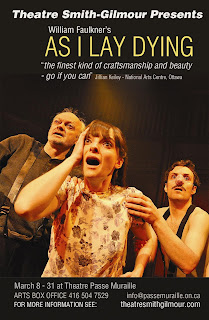 8-31, 2013. An original adaptation, AS I LAY DYING is the evocative Southern gothic chronicle of the Bundren family odyssey across the Mississippi countryside to bury their wife and mother. Calamity haunts their 40-mile funeral procession, an absurdly tragic journey through the grotesque intersection of character and circumstance. Tickets will be available via the artsboxoffice.ca, 416-504-7529, or at the door.

AS I LAY DYING transgresses triumphantly all the principles of good taste – it is a rich and unsettling tale that takes us to the edge of sanity as each member of the family struggles in their own way with the promise made to Addie Bundren. A dying Addie watches her eldest son build the coffin she’ll soon occupy. The family – including Addie herself, speaking from beyond the grave – reveal their foibles and secrets in overlapping narratives chronicling the journey, marked by flood and fire and family discord. There aren’t any angels aboard this wagon - just humanity, with all of its virtues and vices, beneath an ominous halo of circling vultures. 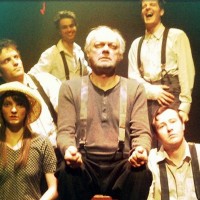 Theatre Smith-Gilmour occupies an essential place in the landscape of Canadian Theatre; founders Michele Smith and Dean Gilmour have created physically bold and moving pieces of theatre, based on the teachings of Jacques Lecoq, since 1980. Their highly-esteemed body of work is known for its compassionate vision of the human condition, and includes the acclaimed Chekhov Cycle and Lu Xun Blossoms. Theatre Smith-Gilmour has been nominated for 29 Dora Awards, and won 8, including Outstanding Production and Outstanding Actor (Dean Gilmour), and Outstanding Director (Michele Smith), for both Chekhov’s shorts and Chekov longs – In The Ravine.