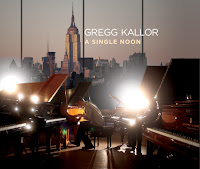 were in fact written as (in his words) "a love letter to this incredible city" - New York City that is.

Co-produced by five-time Grammy nominee Fred Hersch, the music consists of both composed and improvised sections and covers an impressive emotional range from the reflective Found (the Central Park of the suite) to the kinetic (naturally) Espresso Nirvana and (my favourite) Straphanger's Lurch. Straphanger's Lurch has flashes of pop music and an extended improv section. The tracks are of varied lengths and offer an enjoyable range of moods from start to finish.

Gregg Kallor's music is contemporary while giving a nod to the past. It sparkles with a kind of melodic

dissonance that is aided by technically impressive playing with a nice sense of dramatic flair. There is a definite narrative and evocative sensibility. I could see the city's many moods as I listened.

Gregg first album, There's a Rhythm, was recorded with his jazz trio and released in 2001. He had his New York concert debut at Carnegie Hall in 2007 and his previous compositions include the acclaimed song cycles Exhilaration and Yeats Songs. A Single Noon got its world premiere in 2011 also at Carnegie Hall. He received the Aaron Copland Award for composition and composed a three-movement concerto for piano and orchestra during his 2012 residency at the composer's home.