Etobicoke - The Exploring Creativity in Depth concept has been adapted over a period of twenty years for a variety of populations, including elementary school students, youth with special needs, classroom teachers, and museum visitors. By activating the creative imagination participants gain access to their authentic creative potential and express emergent images and feelings in various media. By engaging the deep structure of the 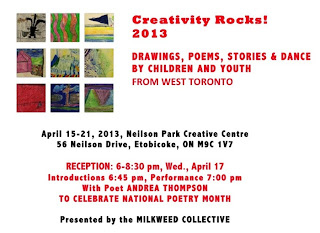 creative process, the program promotes self-awareness and self-esteem, mutual understanding and reciprocity, and respect and wonder for the transformative power of art.

EXHIBITION: 130 drawings by 65 students selected from over 300 children and youth (Grades 2 to 8) in seven West Toronto schools. The artwork was created during Exploring Creativity in Depth programs provided by the Milkweed Collective at the Neilson Park Creative Centre. Under the direction of Austin Clarkson (prof. emeritus, York University), the artist-teachers of the Milkweed Collective have provided ECiD programs to over 6,000 students and 150 teachers from "priority" schools since 2002.

RECEPTION: Youth from North Kipling Junior Middle School will recite original poems on Human Rights and perform interpretive dance. NKJMS received an ArtsSmarts 21st Century Youth Creativity Challenge award for the Creativity Rocks Project, the only school in Ontario to receive a Round II award. Slam Poet Andrea Thompson will respond to the performances in celebration of National Poetry Month.

Andrea Thompson has performed her work at venues across North America and overseas for the past twenty years. Andrea is co-editor of the anthology Other Tongues: Mixed Race Women Speak Out, author of the poetry collection Eating the Seed, and creator of One, Urban Music Award nominated CD.

Exploring Creativity in Depth: Reflective viewing of artwork in a gallery, making oil pastel drawings, writing poems and stories about the drawings, and sharing artwork in small groups stimulates the imagination and increases confidence in creativity and love for art. Two drawings by each student will be mounted side by side to show the transformations that take place when the creative process is engaged in depth.