“You must leave, go and bring honour to your family. Find your gold mountain, make your fortune.  Then and only then can you return.” 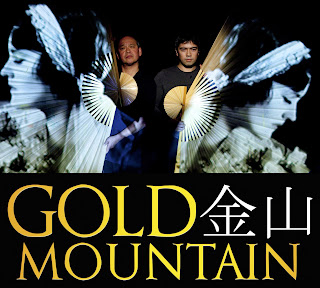 Despite their difficult relationship, David Yee elicits from his father, Yee Lui, the story of his tragic life; having to flee a small village in China and its political upheaval with the hope of finding his ‘gold mountain’-  a name given to North America’s west coast by Chinese immigrants looking for riches during the 19th century gold rush. Yee Lui finds himself in Liverpool married to an English woman and with a family, but without the trappings of the success he dreamed of. Loosely based on actor David Yip’s own father's life, Gold Mountain is an intimate tale of father and son, immigration and belonging, told with breathtaking theatrical magic. David tries to piece together the broken jigsaw of his father Yee's life - exploring his rambling stories in search of family truths. But every answer asks 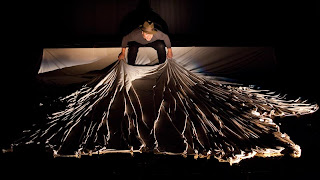 more questions- will David find the man he barely knew? In this epic journey, follow Yee’s story of personal exile against the backdrop of Communist China, war, gambling, addiction, adversity and friendship. Les Deux Mondes’ striking environment, including a transporting soundscape and brilliant images created by lighting, shadow play and film, is coupled with riveting performances. Follow Yee’s search for fortune and happiness, and David’s ultimate understanding, through the multimedia poetry of this celebrated, contemporary show.

For writer Yip, the play is a cocktail of stories shaken and stirred, “Some accounts are true, others made up, but the emotional roller coaster of the piece is very close to the mark.” It was also important for Yip to shed light on the often untold stories of his heritage, “With nearly 40 years as an actor, I have become more and more frustrated that so little writing comes from the British-Chinese community.” He continues, “All through my childhood, the veil of secrecy and suspicion hung heavy, the past was to be forgotten and only the future could be contemplated and talked about. It is up to artists like myself to help lift that veil and allow the younger generations to be able to ask, ‘why’?” Yip enjoyed talking to artists from the Chinese community in Vancouver when Gold Mountain played there in November, “Canada is fortunate to have a thriving community with great historic links to the ‘gold mountain’. I was inspired by our exchanges of ideas and thoughts.” 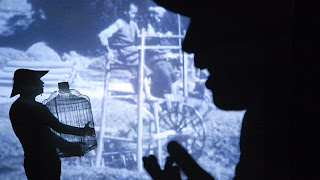 Though a memory-play, the story’s themes address today’s issues. Les Deux Mondes has had the opportunity to play in 35 countries during its forty years of existence. Daniel Meilleur, Gold Mountain director (and company co- Artistic Director with Michel Robidoux), discovered the issue of immigration all over the world, lived more or less harmoniously or confrontationally, “No wonder that a story that depicts a Chinese emigrant in Liverpool can move spectators in Sweden just as much as it touched us as Quebec artists. The concerns are universal.”

For the designers, the company’s Villeray neighbourhood is ever-present. This from Michel Robidoux- “Any play about the integration of newcomers into a society is automatically relevant for audiences everywhere. The story is also about hope and the willpower of continuity.” Yves Dubé adds, “Besides tackling the reality of immigrants, Gold Mountain speaks to the generation gap, racism, interracial marriages and forgiveness.”

The play is personal for Robidoux, “Being a huge Beatles fan and the son of a Montreal harbour longshoreman, I would have been drawn to any story taking place in Liverpool and around its harbour. My father worked for the Cunard Steamship Company operating between Liverpool and Montreal.” When Robidoux came back from Les Deux Mondes’ first tour in China, he started building virtual musical instruments from samples he had recorded and composed a number of musical themes, “Many compositions fit the Gold Mountain project and the rest were inspired by this crossbreeding of China and Liverpool, the cradle of The Beatles, whose music was some of the first I learned.” 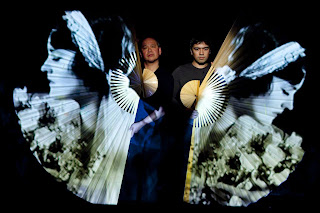 With a solid reputation for artistic innovation and experimentation, this Les Deux Mondes production is no different. Here, text influences the multimedia universe and vice versa. Having seamlessly collaborated together on four previous productions, this first-class team is reunited for this gorgeous show: concept, lights and costumes, Daniel Meilleur; visual concept and video design, Yves Dubé; and sound design, Michel Robidoux; with credit for the overall concept shared by all three.