Break dance moves at pow wows. Round-dance flashmobs to show community might. EDM that pounds with traditional drumming, reggae’s pulse and sway, and dubstep beats. It’s all part of the scene that Ottawa’s A Tribe Called Red sprang from and helped create. 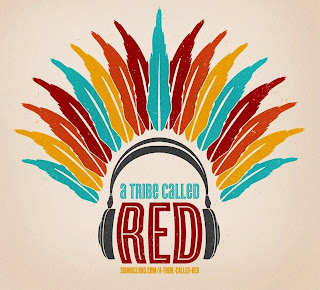 The three-man audio-visual crew are the natural extension of something that’s been brewing in Canada for several generations, that’s just coming to a head right now. Aboriginal artists, in particular the burgeoning community of young urbanite thinkers and makers in Canada’s cities, take what’s there—new technology, images, and sounds—and link it to a long line of creativity. “It can be challenging, but pow wow music is intended to make you dance, so combining the two is an pretty easy fit,” notes ATCR’s DJ Shub.

What results may tear up the club, but also manages to flip assumptions, reclaim clichés, and work social change. The mix has already won the group a Polaris Prize nomination (Canada’s answer to Britain’s Mercury Prize) and press kudos (including a spot in the Washington Post’s top 20 albums of 2012).

“In Canada, we’re the fastest growing demographic at the moment, especially in urban centers,” explains ATCR’s Bear Witness, a veteran DJ and the force behind the crew’s striking visuals. “We’re growing more and more visible, even when we don’t fit the stereotypes that are instantly recognizable.”

“We’re urban Aboriginals,” states DJ NDN, “and we’re finally creating a culture for ourselves. We’re making our own identity.”

“What we’re seeing right now is a renaissance within arts and politics, coming from that growing strength and our growing numbers,” explains Bear, “from that feeling of this is our time now. We’re bouncing back from the different attempts of genocide on our culture.”

This serious message sneaks slyly into club beats: the drops and ecstatic bass, the hard-hitting sounds that get the party started. From dancehall-inflected grooves (“Trap Heat”) and Diplo remixes, to pow wow step tracks (“The Road”), A Tribe Called Red got its start hosting one of Ottawa’s hottest club nights, the Electric Pow Wow, after the three DJs/artists met up and realized they had to do something together. Things clicked, and fast, after founders Bear Witness and DJ NDN teamed up with Canadian DMC champ, DJ Shub (who happened to be from the same Nation as Bear and turned out to be a cousin). After their first chat, Shub, an 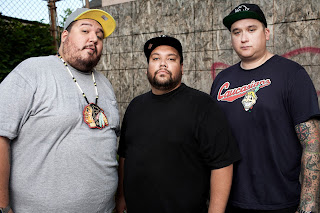 experienced hip hop producer, rushed back to his home several hours away and managed to have his first pow wow-inspired track in his collaborators’ inboxes the next morning.

All three hail from backgrounds that embraced both a strong identity as First Nations people, with a firm, seamless sense of themselves as artists who draw freely on a whole range of styles, ideas, and sounds. They all credit their families for helping them find the way to bring all the elements together.

“I come from a family of artists, and growing up, I was lucky to be exposed to all sorts of stuff at a young age,” explains Bear. “I remember seeing [Sufi devotional singer] Nusrat Fateh Ali Khan at 12, playing in a tent. I have to give my father the nod for really pushing me into a DJ. He would always send me music, bands like Earth Wind and Fire and jazz, but he was also really up on new music. He would send me tapes in the mail, including albums by Snap and KLF. I was the coolest kid in 5th grade, and those nudges pushed me into becoming a DJ.”

Thanks to this wide-ranging curiosity and broad-minded creativity, the trio rapidly won a huge local following—inside and outside the Aboriginal community—and injected additional energy into the already bubbling Aboriginal arts scene. “We created a space in the club for Aboriginals to come and hang out,” DJ Shub recalls. “It started with us just mashing up pow wow records, but we wanted to give back. I was a producer, and so we starting producing our own tracks.”

“I think what we’re doing happened at a specific time when people were open to and ready to hear what we were doing,” reflects Bear. “People have been working toward this for years. There’s always been this strength to adapt and use new technology and new elements,” from early incorporation of metals into Aboriginal culture, to the embrace of the snowmobile in Canada’s Far North. In music and art, the dynamics are no different: Bear remembers watching fancy dancers at a pow wow who incorporated break dance moves and funky checkered bandanas into their performances. It was cool, and nobody batted an eye.

Incorporation often involves taking something seemingly useless or detrimental, and reclaiming it for very positive ends. It’s both seen and heard during A Tribe Called Red’s sets. “As a multi-media artist, I’ve been working for years, even before A Tribe Called Red, to get beyond the basic—and basically correct—reaction, that this is racist. I wanted to find connections that I had personally, as a young man,” recounts Bear. “You don’t have positive images or portrayals of indigenous people, so I created my own connections with a lot of them, these characters in the films.” 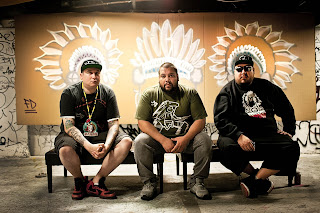 This may mean reframing and elevating kitschy popular images of the warrior (“Electric Pow Wow Drum”), shining an unflinching light on the creepy European gaze and questionable portrayals of Aboriginal women (“Red Skin Girl”), or merely grabbing a familiar scene from a classic film (like, say Back to the Future III’s Wild West shots) and demonstrating its problematic racial undertones, in the video aspect of the crew’s performances.

While hitting on heavy issues with an acute, eloquent sense of history, the results are never heavy handed. There’s no soapbox, just perfectly timed beats and images. “When we bring this into the clubs, we’re taking these political messages and hiding them. We’re going to hit you when you want to party; your back is down you’re not looking for a fight,” Bear says. “Instead of pointing a finger and saying you’re wrong, I want to lead people to recognize things that are systemically racist. It’s more powerful when you can help someone find that answer in their own life and experience.”

• A Tribe Called Red’s album is available for free download at www.electricpowwow.com .