• see other tour dates including NYC April 6 below

After a Grammy nomination and a Latin Grammy Award for best Alternative Album, Los Amigos Invisibles are ready to take back the Latin music world by storm with their seventh studio album titled Repeat After Me, to be released by Nacional Records on April 2nd 2013. To celebrate the release of their new album, 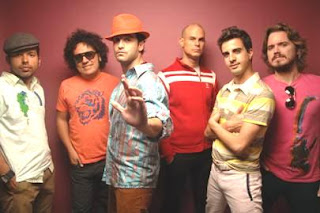 the band will be embarking on an coast-to-coast tour during the month of April.

Grammy winners Los Amigos Invisibles are definitely amognst the hardest working bands in the Latin Alternative scene. Having toured over 60 countries, the NY-based Venezuelan funk combo has been able to maintain and untouchable reputation for both their meticulously crafted albums and stunning live performances.

Since their first album in 1995, Los Amigos Invisibles have developed a sound based on what they call “gozadera” - an irresistible fusion of Latin rhythms with fiery funk, disco grooves and quirky retro lounge music. The band got their first break when David Byrne (Talking Heads) discovered them and signed them to his label: Luaka Bop. Byrne opened doors for the band across the globe and Los Amigos Invisibles soon became an international touring machine.

Los Amigos Invisibles moved to New York City from their hometown of Caracas in 2001 and entrenched themselves in the local scene. With their electrifying live show and an appeal that reaches way beyond the Latin Alternative niche, the group began building a considerable fan-base across the U.S. 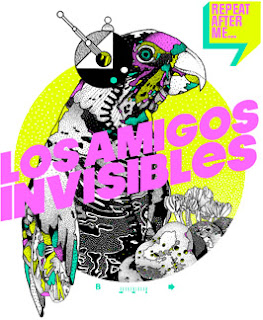 After Luaka Bop and a try at independence, Los Amigos Invibles signed to Nacional Records for their groundbreaking album Commercial in 2009 where they pursposely tried to make their songs more accessible to a wider audience, albeit without appealing to top-40 clichés. Ironically, Commercial earned them a Latin Grammy award in the Aleternative Album category and was followed in 2011 by Not So Commercial, which was nomintated for a Grammy in the category for "best Latin pop, rock or urban” album.

Guided by the genious of guitarist DJ Afro (who has also released two albums independently as a Latin house DJ/producer/remixer) Los Amigos Invisibles live performances are known for their constant uptempo energy and their live mash-ups and tongue-in-cheek interpolations of internationally famous tunes mixed in their set.