(Albany, NY) -- Get ready music lovers!   Albany ranks as the nation’s 9th largest breeding ground for new music and is the location for this year’s MOVE Festival for the second year running.  For those that couldn't 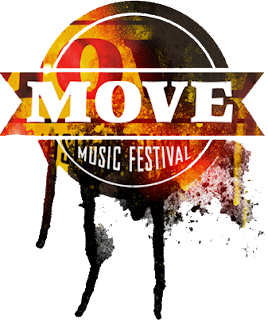 afford the price of a ticket to Austin last month, MOVE Music Festival is the alternative.  Move is an indie music festival that premiered last spring and is completely focused on spotlighting diverse and emerging talent, much akin to the early days of SXSW.  It takes place on Saturday, April 27.

“The idea behind Move is to giving regional bands a chance to launch their careers in the independent music scene,” comments festival owner and founder Bernie Walters.  The festival is the perfect platform for these bands to gain experience in performing live to a local audience as well as to industry insiders,” he continues.

Move will host a roundtable panel discussion featuring an impressive list of experts as well as a keynote speech from industry veteran Bob Tulipan. Bob's career spans virtually every facet of the music business from promotions to management.  He's worked with acts like The Rolling Stones, The Police, Patti Smith and Public Image Ltd and assisted with concerts and festivals such as Woodstock '94 and '99, Live Aid, Warped Tours and Lollapalooza.  He currently represents UK band Strangefruit and regularly lends his expert opinion on to print and broadcast media around the world. 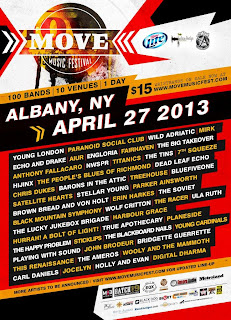 Virtually every aspect of the industry will be represented at the roundtable. In addition, Benji Rogers, co-founder of Pledge Music, Lou Plaia, co-founder of Reverb Nation, Allie Crystal of Universal Music Publishing and legendary drummer Jerry Marotta will be in attendance.  For more information on attending industry, visit http://movemusicfest.com/bios/.

SXSW grew from 700 attendees in 1987 to over 300,000 in 2012 and even beyond that this year. In the same way that SXSW started out as an organic stage for showcasing and promoting indie music and film, and encouraging progressive dialogue within those industries, MOVE is attempting to do the same.
General admission wristbands cost $15 plus shipping and handling. Check out the Pledge Drive where you can pledge for early access & discounted packages to MOVE 2013!