Old Soul, New Groove: Hadar Maoz Rethinks the Mystic Melodies and Joyful Jams of her Bukharian Jewish Roots
Israeli singer and multi-instrumentalist comes to the U.S. for her first showcase in April.

• In New York City at DROM April 11, 2013
Inspired by Central Asian mystic singing, by long lines of Bukharian Jewish women raising their voices and beating out complex rhythms, Israeli vocalist and multi-instrumentalist Hadar Maoz knows how to channel centuries of spiritual teaching and joyful music. A dynamic performer, Maoz takes her roots and filters them 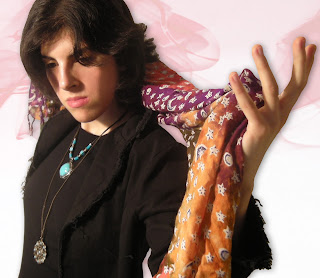 through her other love—funk and rock—organically uniting Asian modes and Western pop grooves.

“I grew up learning Bukharian music from my family,” Maoz explains, “But I also love James Brown. For me, the combination was really natural.”

American audiences will get their first taste of Maoz’s high-energy, delightfully diverse expression of this blend on April 11, 2013 at NYC’s Drom. At this special showcase, Maoz will demonstrate—via blazing percussion solos, passionate vocals, dance, and songs drawing on the Kabbalah—how instantly engaging Bukharian traditions performed with contemporary flair can be.

Hadar Maoz comes from a long line of artists—instrumentalists, singers of songs based on the Zohar, dancer. Under the kind direction of her grandmother and great grandmother, both of whom emigrated to Israel yet maintained their strong Bukharian identity, Maoz began playing the dayereh (frame drum), tar (long-necked waisted Persian lute), and saz (Near Eastern lute) from a very young age. 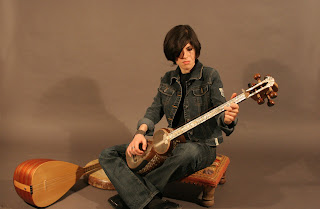 The Bukharian Jewish community has its own language (related to Persian and Tajik, but with Hebrew influence) and has forged its own distinct musical style over the centuries. Bukharian instrumental ensembles brought together modal music and traditional Jewish devotional melodies, and singers performed everything from bittersweet love ballads to profoundly spiritual and meditative songs drawing on Jewish mystical lineages.

Maoz’s family passed down some of the unique Bukharian renditions of texts from the Zohar, a source that continues to spark creativity for this musician and Kabbalah teacher. “In my family, there was a tradition based on the book of the Zohar, on the wisdom of Kabbalah, which has a unique expression in Central Asia,” Maoz explains. “My grandma taught me to sing in a spiritual way. She learned from her father who was a professional singer and sang lyrics from the book of the Zohar. Not anyone can sing it, only if it gets passed down the generations in your family.”

These songs, sung in particular modes, demand a different approach to performance, one akin to prayer. “My grandma told me that if you sing those scales or holy lyrics from the Zohar, you need to be in a special state of consciousness,” notes Maoz. “It’s like meditation, in that you go into a higher and higher state in your inner world.”

Other beautiful traditions were also passed on to Maoz: her grandmother was a masterful player of the dayereh, which fascinated the young Maoz. She also picked up her first lessons in tar and saz from her family, though she later went on to train intensively with masters of the instruments. 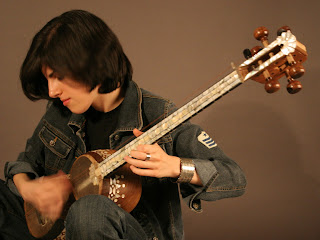 Yet a large part of Maoz’s musical aesthetic comes from elsewhere, from the funk, rock, and r&b she got into as a teenager. Maoz picked up the guitar and the electric bass as a young woman, and her imagination was swiftly captured by the groove. She fell for Motown, for James Brown, and for the early albums of Michael Jackson.

As a student at a musical arts high school in Tel Aviv, she began her first forays into uniting her Bukharian roots and American pop, a trajectory that would eventually lead to worldwide touring with bands like Habrera-Hativeet. “When people first heard me, when I first began performing professionally as a teenage,” Maoz recalls, “they often said I was an old soul in a young person’s body.”

Even when playing upbeat, more light-hearted pieces, Maoz follows the lead of her foremothers, diving into performance with great gusto or with profound respect. Utterly committed and focused on stage, whether dancing or striking the goblet drum, Maoz finds the golden mean between tradition and pop.

“It came really naturally to me, as a musician in Israel,” she reflects. “We may be in the Middle East, but we have lots of American influence. Here, the energy from the East and from West meet and mix. So, I didn’t think too much, but simply found out how my Asian ethnic heritage and Western music can really combine.”