Shred the Accordion: Koby Israelite Balkanizes the Blues (and Vice Versa) on Blues from Elsewhere

If Jimmy Page played accordion, and if Taraf de Haidouks sang the blues, they’d be partying along side Israeli-born, London-based multi-instrumentalist Koby Israelite. With devil-may-care daring, the Balkan and 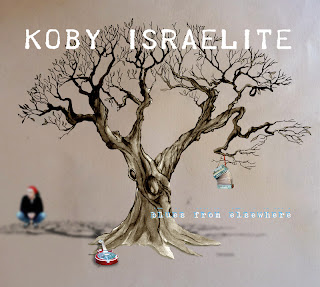 This is no novelty record, though, no gimmicky mash up. To Koby, it’s a natural, if unexpected sonic crossroads. “When I decided I was going to do the album, I tried not to introduce the two genres in a contrived way, because sometimes it just didn’twork,” he explains. “I had to work on the track or simply abandon it. It’s not easy tomake this mix sound organic, unforced. But I think I blended well.”

The proof is in the groove, in the balance of virtuosity and humor that guides the album. From “East of Nashville,” where Bulgarian rhythms get a boost from twanging country guitar, to “Johnny Has Cash No More,” inspired by Cash’s signature feel but with Arabic melodic flair, Koby works the connection, making 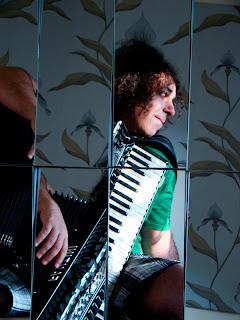 music that’s crafty but not contrived. Using an Italian mandolin to stand in for a cimbalom (“Crayfish Hora”) and a melancholy Armenian duduk (thanks to top player Tigran Aleksanyan) to reveal a whole new side to Led Zeppelin’s epic “Kashmir,” Koby goes to great lengths to show that the blues can be from everywhere and anywhere.

Koby Israelite didn’t set out to be a Balkan bluesman. After four strong releases on John Zorn’s Tzadik label, the rock drummer and classically trained pianist, the restless listener and composer, wanted to try his hand at something else, a curious idea that been percolating for some time: the union of blues and Balkan sounds.

It started with a huge epiphany, in the shape of a concert by the legendary Romanian Gypsy band, Taraf de Haidouks. On the tails of major international buzz about the group, Koby’s wife at the time bought him a ticket. He was less than enthused. “I remember telling her, I don’t want to go hear a bunch of old guys who don’t even have a drum kit!” he recalls with a laugh. “But she insisted, because I have Romanian roots. So I went, and even though I’m not a religious guy, 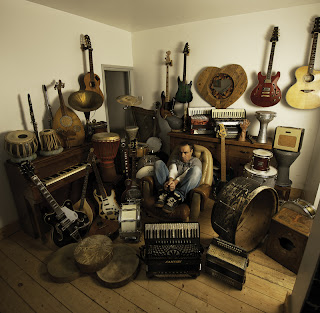 I swear I heard God in the music. I bought an accordion that next day. As a drummer, I didn’t mind getting into an instrument many people think is dorky.”

Koby turns the dorky into the defiantly cool, ripping merrily though complex, undulating accordion lines that echo the best, hottest rock guitar solo in their shape and energy (“The Accordion is the New Guitar”). But he also knows when enough is enough, turning to the rest of instrumentarium—guitar, drums, mandolin, banjo—when it feels right.

“It’s not that I try to be unique. I’m not trying to be interesting or new for its own sake. I’m just trying to reach out to people with my music. To touch people,” Koby reflects. “I don’t want to bore people to death. My music has always got some edge, and it needs to have a groove.”