Toronto – Six National Film Board of Canada productions or co-productions will be featured at the Hot Docs Canadian International Documentary Festival in Toronto from April 25 to May 5, 2013, including five world premieres.

The NFB is also partnering on the festival’s free 20th-anniversary outdoor screening, Docs at Dusk, reflecting the NFB’s longstanding goal of bringing acclaimed documentary cinema into Canadian communities. Docs at Dusk will take place on the evening of May 2 on the fields of the University of Toronto’s Victoria College, across from the Isabel Bader Theatre. The event will begin at 8 p.m. with live music and refreshments; the film will begin at 9 p.m.

NCR: Not Criminally Responsible
While gripped by psychosis, a young man stabs a stranger six times. Declared “NCR”―not criminally responsible on account of mental disorder―the man is confined to a mental health institution. His victim survives, haunted by nightmares but relieved that her attacker has been locked away. Twelve years later, she’s terrified to learn that he’s out, living under supervision, and has applied for a discharge that would mean he’d no longer be required to take drugs to control his illness. With unprecedented access to the patient, victim and mental institution, NCR: Not Criminally Responsible offers a timely and provocative examination of violence and mental illness, and the rights of both victims and patients.

NCR: Not Criminally Responsible is produced, directed and written by John Kastner, the winner of four Emmy Awards, including one for the 2010 NFB co-production Life with Murder. NCR’s producers are Deborah Parks, with Silva Basmajian as producer and executive producer for the NFB. The film is produced by J.S. Kastner Productions and the NFB, in association with the Canadian Broadcasting Corporation and documentary Channel.

Chi
Anyone who knew Babz Chula—a talented, larger-than-life actress from Canada’s West Coast—could tell you that her life force, or chi, was incredibly strong. Babz convinces director Anne Wheeler to join her on a journey to Kerala, where Babz will undergo treatment by a renowned Ayurvedic healer in an effort to manage her six-year battle with cancer. The bare-bones Indian clinic at first disappoints, but Babz is uplifted as her condition seemingly improves. When she returns home to learn that her cancer 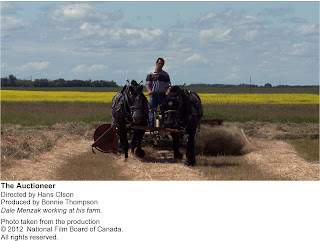 has advanced, the irrepressible Babz invites Anne and her camera to continue bearing witness to her journey into the unknown.

Chi is written and directed by Anne Wheeler. The producer of the film is Yves J. Ma, with Tracey Friesen as executive producer.

Buying Sex
Timely and wise, this important documentary about the state of prostitution laws in Canada is a revelation. Buying Sex captures the complexity of the issue by listening to the frequently conflicting voices of sex workers, formerly prostituted women, policy-makers, lawyers and even the male buyers who make their claim for why prostitution is good for society. Examining the realities in Sweden and New Zealand, and respecting the differences of ideology as Canada works its way toward an uneasy consensus, the film challenges us to think for ourselves and gives a gripping and invaluable account of just what is at stake for us all.

Buying Sex by Teresa MacInnes & by Kent Nason, National Film Board of Canada

The Auctioneer
Dale Menzak is an auctioneer specializing in the sale of family farms. A man of few words when not auctioneering, he also works part-time as an undertaker. From his portable auctioneer’s booth, Dale helps to liquidate antiquated farm equipment, after which he dons a sombre necktie and returns to his job at the funeral home. Set against a backdrop of gorgeous Prairie vistas, The Auctioneer observes Dale 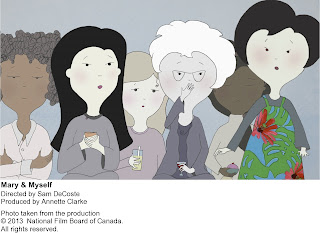 from a respectful distance as he facilitates the difficult process of letting go.

The Auctioneer is directed by Hans Olson and written by Clark Banack. The film is produced by Bonnie Thompson, with David Christensen as executive producer.

Mary & Myself (screening before Chi)
Mary & Myself is a story within a story, a meta-narrative about two Chinese Canadian women making their theatrical debut playing “comfort women” in The Vagina Monologues. Fusing activism and performance, this short animated documentary honours the thousands of girls and women from Korea, China, Japan and the Philippines who were forced into sexual slavery during the 1930s and ’40s.

Mary & Myself is written, directed and animated by Sam Decoste. The producer is Annette Clarke, with Ravida Din and Kent Martin as executive producer.

Alphée of the Stars
Alphée has a rare genetic disorder that hampers her development, yet she continues to defy medical expectations. After her parents reject the idea of placing her in a specialized classroom, they move the family to Europe for a year. Here, her father—filmmaker Hugo Latulippe—focuses on his fairy-like daughter’s learning, in hopes of eventually integrating her into a regular classroom. A moving declaration 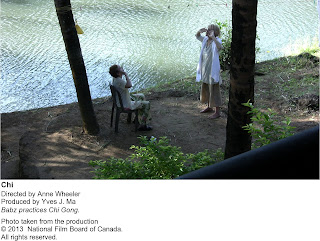 of love from a father to his daughter, Alphée of the Stars is also the story of a gamble—of a family stealing away for a year in order to try and change the course of events.

Alphée of the Stars is produced by Éric De Gheldere and Hugo Latulippe (Esperamos Films) and Colette Loumède (NFB).

About the NFB
The National Film Board of Canada creates groundbreaking interactive works, social-issue documentaries and auteur animation. The NFB’s award-winning content can be seen at NFB.ca and on apps for smartphones, tablets and connected TV. Canada’s public producer and distributor since 1939, the NFB has created over 13,000 productions and won over 5,000 awards, including 6 Webbys, 12 Oscars and more than 90 Genies.