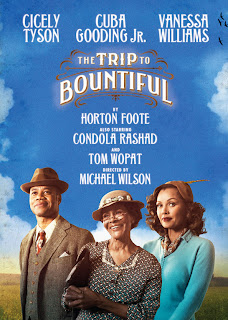 THE TRIP TO BOUNTIFUL follows Carrie Watts (Tyson), an active, highly motivated widow living in a cramped apartment in Houston in the Spring of 1953 with her son (Cuba Gooding Jr.) and daughter-in-law (Vanessa Williams). Carrie escapes her relatives’ watchful eyes to realize her dearest dream: to return to her beloved hometown, Bountiful. What starts as an ordinary trip soon becomes an inspiring and life-changing journey of discovery.

HORTON FOOTE (Playwright) was awarded the National Medal of Arts Award from President Clinton in 2000, Mr. Foote’s prolific writing career began with his first play, Texas Town, produced Off-Broadway in 1941.  Since then his plays have been produced on Broadway, Off-Broadway, Off Off-Broadway, and at many theaters around the country.

MICHAEL WILSON (Director) is one of the most acclaimed interpreters of Horton Foote’s plays, having directed Dividing the Estate on Broadway, as well as the premiere of Foote’s three part, nine hour epic The Orphans’ Home Cycle, for which he received a Drama Desk and the Outer Critics Circle Award for Outstanding Direction of a Play.

THE TRIP TO BOUNTIFUL is Horton Foote's masterpiece about memory, mortality and the undeniable, universal yearning for home. Don't miss this powerful show The Wall Street Journal calls, "unforgetably excellent."