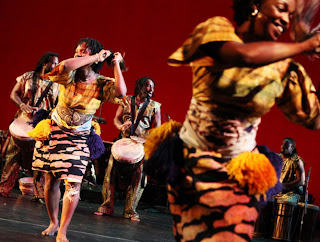 community events for an exhilarating celebration of culture from Africa and its diaspora. For the annual Memorial Day weekend performances, BAM welcomes Umkhathi Theatre Works from Zimbabwe, plus Brooklyn’s own BAM/Restoration DanceAfrica Ensemble and additional companies, for a program that promises to inspire. And don’t miss the one-and-only outdoor bazaar! Agoo! Amée!!

Umkhathi Theatre Works (Zimbabwe)
Umkhathi Theatre Works is a theater and dance troupe formed in 1997 in Bulawayo, Zimbabwe, currently in residence at Salukazi Performing Arts Centre in Njube, Zimbabwe. The company has emerged as a leading theater organization in its home country and has performed throughout Africa and as far from home as Aberdeen, Scotland. Its mission is to strive for community development through the arts while reviving African cultures and traditions.

BAM/Restoration DanceAfrica Ensemble
An annual favorite and symbol of youth involvement in the preservation of African heritage, the BAM/Restoration DanceAfrica Ensemble returns to the BAM Howard Gilman Opera House for its 16th consecutive year. Under the mentorship of Baba Chuck Davis, the “exuberant, disciplined young dancers” (The Village Voice) of Bedford-Stuyvesant Restoration Corporation celebrate both ancestral roots and the 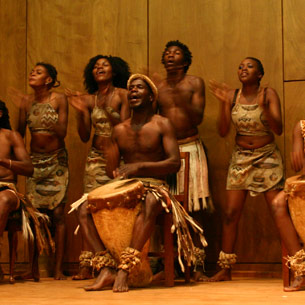 Chuck Davis
Dr. Charles "Chuck" Davis, artistic director and founding elder of DanceAfrica, is one of the foremost teachers and choreographers of traditional African dance in America. He has traveled extensively to Africa to study with leading artists.Davi sfounded the Chuck Davis Dance Company in New York in 1968 and the African American Dance Ensemble in Durham, NC, in 1983. He has been a panelist for several programs of the National Endowment for the Arts and is a recipient of the AARP Certificate of Excellence, the North Carolina Dance Alliance Award, the 1990 North Carolina Artist Award, and the North Carolina Order of the Long Leaf Pine. He has served on the board of the North Carolina Arts Council since 1991 and in 1992 he received the North Carolina Award in Fine Arts, the state's highest honor. In 1996, Davis and the African American Dance Ensemble were awarded a $100,000 grant from the National Dance Residency Program, a three-year initiative launched in 1994 by the New York Foundation for the Arts and funded by the Pew Charitable Trusts. In 1998 he received an honorary doctorate from Medgar Evers College; he has received honorary doctorates from several universities, all of which mean a great deal to him. Most recently, Chuck Davis and DanceAfrica were cited as one of "America's Irreplaceable Dance Treasures: The First 100" by the Dance Heritage Coalition.