Toronto, ON- 360 Screenings has expanded their popular interactive screening series to include two days and three separate productions on May 31st and June 1st, each offering the same immersive experience.  A fusion of theatre, cinema and cocktail party, 360 Screenings will be celebrating their one year anniversary with their largest event to-date with a record number of ticket sales.

360 Screenings allow audience members to become fully immersed in a beloved film of the past through different interactive experiences. Participants could find themselves leaving letters for friends and families during a zombie apocalypse, having a French lesson for their day in Paris, learning to make soap in an underground fight club or connecting to the other-side with the help of a psychic medium. Each production is held at a historic Toronto building, which is revealed 24 hours prior to the event. The film is kept secret until the conclusion of the evening with the actual screening. Actors, set designs and familiar scenes are re-created while audience members attempt to guess the film.

Clues through the 360 Screenings Twitter and Facebook pages leading up to the event lend themselves to the film's identity and encourage participants to interact before the event has even started. Past 360 Screenings have included Ghost, Fight Club, 28 Days Later and Amélie.

Notice the clue? Think you know the next film? Send your best guess to @360Screenings #guessthefilm! (Image below from the Fight Club screening in October 2012 in the Distillery District) 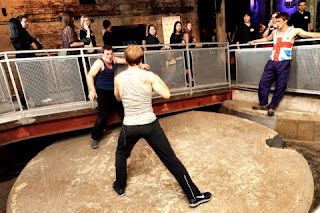 LOCATION: Secret until 24 hours in advance
DATES:
May 31st,  7:00pm
June 1st,   2:00pm
June 1st ,  7:00pm
COST: $60 - $40 for art workers/under 30. Cash bar.
TICKETS
About 360 Screenings:
360 Screenings began in May 2012 with a production of Jerry Zucker’s GHOST. The film and 360 experience played to a sold out audience. 360 Screenings produce events that combine live performance with traditional film viewing. Beloved films of the past set the stage at historic and unique venues while audiences are instructed on what to wear, and where to show up only 24 hours prior to the screening.  The film is kept hidden until the night of the event. From the moment audiences arrive they ‘step into the film.’  The venue, which could be a loft, a field, or any unique location, is furnished entirely to reflect the film's environment. Part cocktail party, part live performance event, part film screening, 360 Screenings is changing the way Canadians enjoy cinema. They invite film lovers of all walks to step into the film.