on May 29, 2013
The National Jazz Museum in Harlem
PARALLAX CONVERSATION SERIES featuring Andrew Nemr and Yacouba Sissoko
May. 28, 2013

Other Jazz Museum events include poetry slams, the Jazz for Curious Listeners free course series, Harlem in the Himalayas concerts and much more.

• Check the calendar for what's coming up 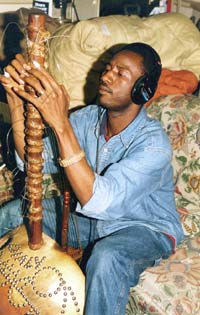 HARLEM (NEW YORK CITY) - Last night I checked out a really interesting event in the National Jazz Museum in Harlem's Parallax Series. The series presents varied artists together to talk about their work and perform in an open conversation with the audience. (And I should mention, that like many Jazz Musuem events, it was free of charge.)

The event features tap dancer Andrew Nemr and Malian kora master Yacouba Sissoko at the Metropolitan United Church at 126th and Madison and began with each artist telling the story of how they got into their discipline. Andrew Nemr is an engaging storyteller as well as a mesmerizing tap dancer and his story was one of inspiration by the generation of greats that came before him - people like Gregory Hines - and the film that, at a very young age, made him fall in love with the art. He danced as he spoke, his steps illustrating his inspirations and progress.

Yacouba talked about the background of his art - one that stretches back to 12th century Mali and the great Mande (Malinka) Empire of Sundiata Keita, when the kora was a sacred instrument played by the new griot clans only for the king. The Sissoko family was chosen as the griot clan, to be musicians and storytellers, the living keepers of the history of their people. Yacouba himself was trained by his grandfather and he is in turn passing along the skill to his own son. Fascinatingly, he demonstrated how the kora is taught, from a simple three note rhythm that gradually adds the layers of complexity and polyrhythms associated with its traditional music. 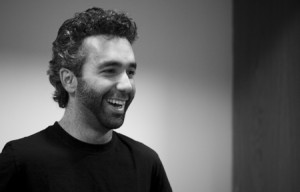 The evening's discussions brought to light a number of really interesting themes and parallels, the first of which was the storytelling aspect to both arts. Yacouba and Andrew talked about their practice as being a continuation of the history and tradition inherent in their disciplines. "Being able to honour what you're given while being able to put it into the context you're in," is how Andrew described it. For him, that includes teaching as a way of passing along tap dance to a new generation. To Yacouba, that idea has involved bringing his very traditional instrument to modern North America to not only spread the word about it but also to experiment with various musical idioms. He's played with many American jazz musicians, including violinist Regina Carter and in the past, people like Paul Simon and Harry Belafonte. "It's a universal language that can bring you together no matter where you come from," he noted. While both loved the modern climate of unlimited musical exchange, the 'free for all' aspect is one of its drawbacks. "People are listening to you everywhere, but you have nothing," he said with a laugh.

At the end, they performed together - completely improvised. In fact, Andrew said he'd deliberately not looked up anything to do with the kora to be fresh. It is the nature of the kora to mesmerize and of tap dancing to entrance - the results were nothing short of fantastic.