TORONTO - Indulge in the sounds of the finest Canadian guitarists of African origin! This star-studded collective unites the talents of 9 musicians, each an expert in their individual style and together creating musical magic with African Guitar Summit. Experience live this superb and unique achievement for African music; the mix of musicians who are distinct in cultural backgrounds and languages yet sharing 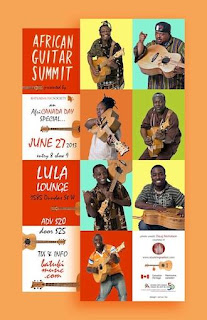 stories and singing each other’s praises, the inspiration of these skilled hands and voices joined in common to reach the summit… A truly incredible experience!

Almost ten years ago, when the members of African Guitar Summit were recruited by CBC Radio for first a concert at Toronto's Glenn Gould Studio, and subsequently a recording, the idea of musicians from different backgrounds playing together was less prevalent. Not so today.

Then as now, the ensemble represented a uniquely Canadian cultural identity: "a diverse group... who have all brought... gifts of their own to this country." That reflection was substantiated both by the 2005 Juno Award won by that debut album, and by the group's appearance a few months later at the Live 8 concert in Barrie, which showcased the best of Canadian talent to an international audience. Since that breakthrough, followed by a second CD and countless kilometres of touring, African Guitar Summit remains "a miracle of compromise and teamwork: each guitarist is a lead voice in their own right, and they work with disparate styles that might otherwise seem irreconcilable"...  worthy 'musical ambassadors' for an early start to Canada Day celebrations.

The 'Toronto-combo' of African Guitar Summit for this 'AfriCanada Day Special' features: from Ghana, the elder master of the guitar, Pa Joe, with 'golden voice' Theo Boakye, the solid bass lines of Ebenezer Agyekum, and the heartbeat of drummer Kofi Ackah; from Kenya, the fiesta guitar of Professor Adam Solomon; and from Madagascar, the quicksilver guitars and harmonies of Donne Roberts, and multiple Juno Award winner Madagascar Slim.