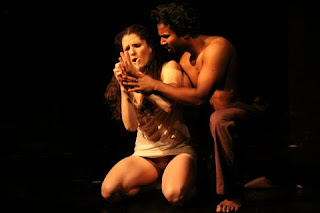 MONTREAL May, 2013 - ANIKAI Dance Company comes to Montréal for the first time to present The Knocking Within.  Just coming off a tour in India, where the show played to standing-room only audiences and received rave reviews, The Knocking Within will be at the MAI, as part of the Montreal Fringe Festival, before returning to Boston for a an extended return engagement. The Knocking Within is created by performers Wendy Jehlen and Pradhuman Nayak with lighting design by Stephen Petrilli.

Inspired by research into the neuroscience of sleep and the anthropology of dreams, The Knocking Within weaves a portrait of two lovers and the nightmares that plague them, unveiling the violence that lies just beneath the surface.  With influences from Capoeira to Bharata Natyam, American Sign Language poetry to Kalaripayattu, West African dance to a wide range of Contemporary forms, this work combines a dizzying array of movement vocabulary, woven together into a new language of the body. The piece calls into question the lines we draw between art forms, between cultures, even between methodologies.

The Knocking Within draws on texts from Shakespeare, arguably the most recognizable playwright in the English language in the world, including lines from Hamlet, Macbeth, Othello, Twelfth Night, Titus 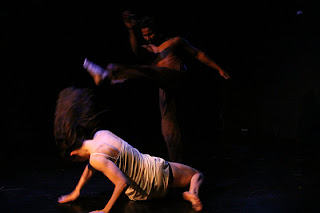 Andronicus and the sonnets, to effect a re-staging of theater, taking it decidedly into the realm of visual communication. The texts are present but implicit, creating a tension between the permanence of print, the persistence of imbedded cultural stories, and the immanent meaning-making power of bodies moving through space.

These texts, taken out of context and performed mostly in translation into Hindi or American Sign Language, conjure up entire narratives with just one line, one word, one gesture.  The challenge for the audience is to use these references, but not to see these characters as the Shakespearean ones – Macbeth, Othello, Ophelia – but rather as two unnamed lovers who could be anyone.

The show was performed in India just after a horrific gang rape and murder had led to widespread protest against rampant violence against women. ANIKAI Dance Artistic Director, Wendy Jehlen, addresses this violence in the play, “So often we view these events as separate from ourselves.  I hope that audience members will connect viscerally with the characters and carry this understanding into their engagement with real world violence.”

Past audiences have responded strongly to the troubled relationship laid bare onstage. One audience member had this to say: “The Knocking Within is a very intense and personal experience. At one point during the show I noticed pain in my fingers. It was only then that I realized I had my hands clutched 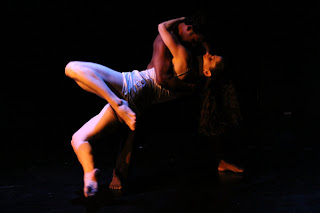 together, fingers interwoven, squeezing against my wedding ring. I was completely unaware of the physical response I was having to the tension unfolding on stage until my fingers went numb.”