The Way of All Fish
By Elaine May

Finds Her Feet by Alan Bennett.

Tickets are $20 - $25, including HST; with a Pay-What-You-Can matinee Sunday, June 23, and are available from the box office at (416) 531-1827 or by visiting www.tarragontheatre.com.  Preview tickets are $15. More info on the double bill is at Kourage Theatre on Facebook.

The Way of All Fish is directed by Dian Marie Bridge (Aneemah’s Spot, Clicking Venus, Da Kink in My Hair) while Miss Fozzard Finds Her Feet is directed by Terry Tweed (Blood Brothers, Bonjour là, Bonjour, Salt-Water Moon).   Casts include three seasoned actors: Elva Mai Hoover and Tracy Rankin in Fish, and Nonnie Griffin in the solo role of Miss Fozzard.  Ms. Rankin is also producer of both plays.

The Way of All Fish by Elaine May

“It’s time for us to measure.”

A self-absorbed executive and her devoted secretary spend an unexpected evening together.  Things are suddenly not as they appear and we find one of them may have other plans in mind.  A challenging game of cat and mouse ensues.  But who's the cat and who's the mouse?  And more importantly, who is strong enough to be ...the biggest fish?

Gemini and Genie nominated, Elva Mai Hoover (Road to Avonlea, Mama, Murdoch Mysteries) stars as Ms Asquith. In 2012, Now’s Jon Kaplan named hers as one of the eight outstanding performances at the Toronto Fringe Festival. 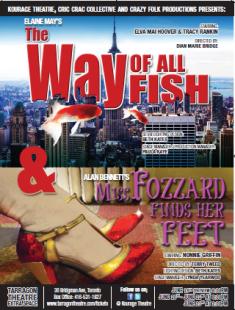 Miss Fozzard Finds Her Feet by Alan Bennett
“If you want to open the door to a lifetime of hard skin, I can’t stop you.”

Miss Fozzard, an aging store clerk, regularly has appointments with a foot care specialist.  When Miss Fozzard's chiropodist moves away, she finds herself playing footsie with a new doctor who has a foot fetish.  A saucy adventure of the feet.