• Check the link for future dates

Last night, I checked out the Toronto Monologue Slam at the Drake Underground. It's a semi-regular showcase for young Toronto acting talent and a hugely entertaining event. 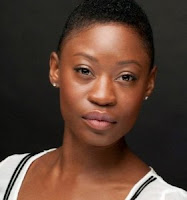 It's the brain child of actor Oluniké Adeliyi (Flashpoint, Saw3D, French Immersion - pictured left), and showcases 11 or 12 actors in a kind of competition. After a first round of monologues, the judges - which include casting and other industry professionals - choose the finalists for the second round, for which the actors perform the same monologue on a theme chosen by the judges.

June's winner was Akosua Amo-Adem, a first time performer at the Slam who set the tone as the first one up with a powerful portrayal of a betrayed wife. With only a few minutes to make an impression, she was able to flesh out a believable portrait and has a nice sense of physical presence on the stage.

If you're an actor, the Monologue Slam is a chance to network and keep your skills sharp during those sometimes long gaps between auditions and performances. Many of the actors wrote their own monologues and it's a chance to test drive your material live and experiment in a supportive environment.

The Drake's Underground was packed and the audience noisily enthusiastic. The talent pool in Toronto runs pretty deep and the monologues offer a range of everything from drama to comedy at an impressive level.

You don't need to be an acting professional to enjoy hearing casting professionals and their critiques; there's real insight into the acting process, what works and what doesn't on stage. It's an entertaining night out and your chance to see the city's up and coming theatre artists.
acting competition monologue show monologue slam toronto actors toronto theatre scene