Visual Arts: No Dull Affairs @ ONsite at OCAD continues till September 2013 in Toronto 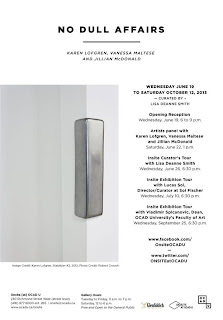 This show features the work of three artists in the spare gallery that looks out on Richmond Street. The urban and minimalist environment seemed appropriate to the work in varying ways.

Jillian McDonald is the 2012 Glenfiddich Artist-in-Residence Prize recipient and she spent several months in Du making the video that's in the show. At the opening, (where I discovered an unfortunately expensive fondness for 15-year old single malt) she mentioned spending about two months shooting daily with another couple of months in post production working on animations and other effects. The film - The Valley of the Deer - was actually shot in the iconic valley and the effects are haunting and atmospheric. Based loosely on Scottish myths about the hunting of the stag, the film plays with those icons - the stag, the purple thistles, the shaggy brown cows, kilts, sheep - and the authentic setting makes it naturalistic rather than stereotypical. Its pace is languid and dreamy, fitting for what is really a love letter to the mythical landscape and its magic.

The otherworldly video is contrasted by the starkly modern and minimalist work of the other two artists. Karen Lofgren's metal pieces, including Stabilizer #2 that wraps around the corner of a column in the centre of the gallery. The installations are polished and industrial in flavour but with a variable finish that's quite beautiful close up. While her metal pieces have a utilitarian and deconstructivist flair, the Extrusion Series consists of cylindrical sculptures inspired by the samples extracted from the earth. Despite the weighty subject matter, the pieces are lighthearted, even amusing in their rubbery texture and 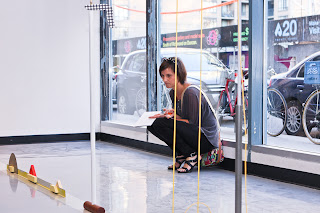 The curator's notes talk about the influence of artists like Kandisnksy and Mondrian on Vanessa Maltese but I was most reminded of Paul Klee's Twittering Machine when I saw her delightful Primary Track; Zag; and Zig - Part A as it was laid out on the floor and suspended from the ceiling. It captures a sense of complexity and also fragility; the pieces move slightly as people pass. It has a sense of fun and imagination.

Jillian McDonald is a Canadian artist living in New York. Jillian, the 2012 Canadian Glenfiddich Artist-in-Residence Prize recipient (one of only eight artists in the world selected each year) has recently returned from Dufftown Scotland. No Dull Affairs will feature Jillian’s stunningly beautiful and haunting new work, “Valley of the Deer,” which brings her residency experience full circle. The cutting edge nature and evolution of her participation-based video art work speaks to the pioneering spirit of the Glenfiddich Prize. Her work was featured in a 2013 radio documentary by Paul Kennedy on CBC's Ideas, 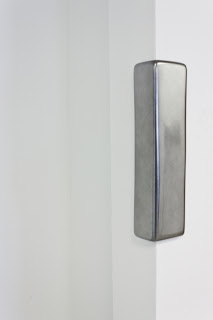 she has been reviewed in publications including The New York Times, Art Papers, The Globe and Mail, The Toronto Star, and Border Crossings; and appears in several books including Better Off Dead edited by Sarah Juliet Lauro.

Karen Lofgren is a Toronto-born Los Angeles-based artist who received her MFA from CalArts and an AOCAD from OCAD University. Solo exhibitions include Machine Project, Pitzer Art Galleries, Los Angeles Contemporary Exhibitions, royale projects : contemporary art and Armory Center for the Arts. Group exhibitions include Los Angeles County Museum of Art, High Desert Test Sites and Human Resources for Pacific Standard Time. Her work has been featured in Artforum critic’s picks, LA Weekly, and the LA Times, as well as books, catalogues, and album covers. Awards include Canada Council for the Arts and Durfee Foundation grants.

Vanessa Maltese lives and works in Toronto and holds a BFA from OCAD University. The National Winner in the 2012 RBC Canadian Painting Competition, she has presented two solo exhibitions at Toronto's Erin Stump Projects. Maltese will soon be exhibiting in a group show at Wil Aballe Art Projects in Vancouver.

Lisa Deanne Smith is engaged in a cultural practice that moves between multiple mediums — art, events, curation, writing and arts administration — exploring issues of voice, experience and power. Recent curatorial projects at Onsite [at] OCAD University include Ads for People: Selling Ethics in the Digital Age and I Wonder by Marian Bantjes.